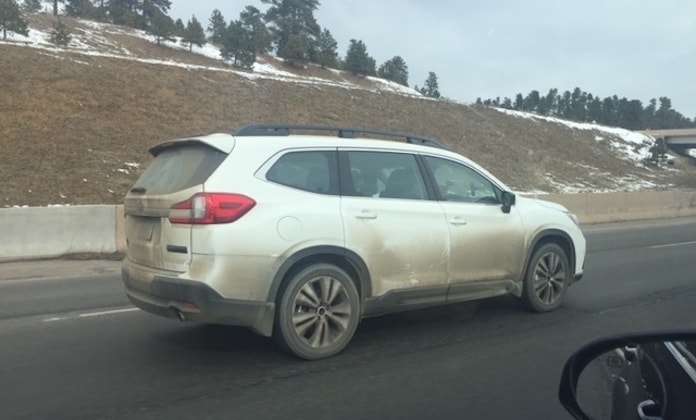 We spot the all-new 2019 Subaru Ascent doing some high-altitude testing in the mountains of Colorado. They are also playing with its EyeSight.
Advertisement

The all-new 2019 Subaru Ascent 3-Row family vehicle doesn’t launch until summer, 2018, but the Japanese automaker wants to know it will ascend the mountain. We spotted the new family hauler outside of Denver in the mountains this week with two Japanese engineers giving it a test run at altitude.

Subaru says the Ascent 3-Row is designed for active families, and they want to make sure the largest vehicle they’ve ever produced is up to the task. This writer sees many test mules being driven at high altitudes here in Colorado as the highly-camouflaged cars head up I-70 into the mountains. Since Subaru already uncovered the Ascent at the LA Auto Show, they just blacked out the logo on the front and rear, and covered the badges on the rear lift gate.

Subaru developed the new 2.4-liter twin-scroll turbocharged four-cylinder boxer engine, producing 260hp and 277 lb. ft of torque, just for the new Ascent. Subaru says, despite its smaller displacement, the newly developed 2.4-liter turbocharged direct-injection boxer engine will achieve smooth acceleration equal to or better than that of competing vehicles with 3.5-liter 6-cylinder engines. That is accomplished with more torque than horsepower, because torque is what gets a vehicle moving from a stop and helps in pulling the vehicle up a hill at altitude, or when towing. 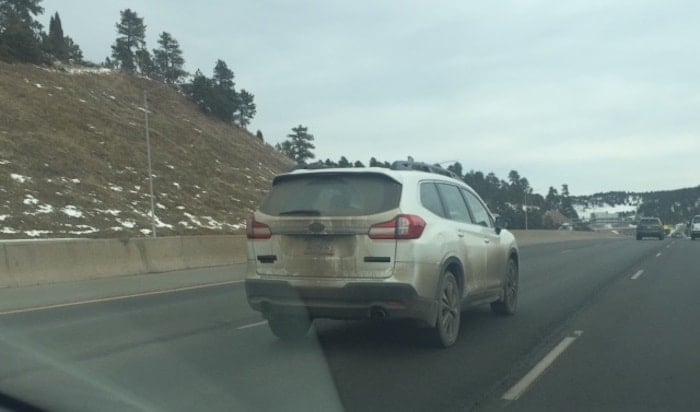 The two engineers were headed east on I-70 back into Denver, and by the looks of the white Ascent they likely took it over Vail pass at 10,662 feet elevation where they encountered snow, ice and magnesium chloride (deicer) on the roads. On the way back they would also have powered up the higher Eisenhower Tunnel, about 60 miles west of Denver, the highest vehicular tunnel in the world at an elevation of 11,013 feet at the East Portal and 11,158 feet at the West Portal.

We noticed the driver was maintaining a constant speed, never ventured out of the middle lane, and when he approached a slower vehicle, the Ascent would slow and then maintain the exact distance between the cars it was following. We figured the two Subaru engineers were testing the Ascent’s standard EyeSight Adaptive Cruise Control (ACC).

The ACC will try to maintain a speed the driver selects, but will slow down as it will prioritize a safe distance to the car ahead, and the driver can also adjust the distance. EyeSight's version of ACC allows it to come to a full stop if the car ahead does, and can resume once traffic moves. All this is done without the driver ever touching the gas or brake pedals.

There will be many active families in Colorado who buy the new 2019 Subaru Ascent 3-Row vehicle to get away for trips to the mountains on weekends and holidays. Subaru brought the new all-wheel-drive vehicle to Colorado for some high-altitude testing before they release it to the public this summer. It’s an important way Subaru tests their newest SUVs and crossovers in varying conditions and environments.

Bob Peto wrote on January 26, 2018 - 9:40am Permalink
Concerned that Subaru Ascent has less cargo space than its competitors- Toyota Highlander, Kia Sorento, Honda Pilot, and even the 2013 Subaru Tribeca & 2018 Subaru Outback! How did they miss that with only offering 72.6 CF?
Michael Grimm wrote on January 26, 2018 - 1:52pm Permalink
I agree, I have a 2014 Outback and a 2003 Forrester. I was hoping for a bigger vehicle for long hauls. I will see when it is released late Spring. I might just get a new Outback if the ascent is to small.
MattK wrote on January 27, 2018 - 1:09am Permalink
Am a Subaru fan... but the Ascent - Oh so ugly ! Subaru really go this one wrong on the looks front.
Bob Barker wrote on January 27, 2018 - 5:08am Permalink
I read that the cargo area is on par if not larger than the competition and that the 72.6 CF (or whatever it is) results from what was measured (i.e., to the top of the 3rd row seats v. the ceiling). There may be some truth in that as the overall vehicle dimensions would indicate a larger cargo but I guess we'll see.
Jonathan wrote on January 27, 2018 - 10:49am Permalink
I have a 2017 legacy with eye sight and the adaptive cruise control will bring it to a complete stop if the car ahead stops but it will not automatically resume until you give a quick tap on the accelerator. FYI. Maybe they are changing this? Not that I care. It’s pretty cool the way it works!
Elliot wrote on January 27, 2018 - 9:43pm Permalink
Seems like Subaru only cars people drive in Colorado mountains. No wonder they have come to test Acsent here as huge % of those will be sold here
Celia Parker wrote on April 6, 2018 - 10:05pm Permalink
Don't forget us in Washington State. We have mountains too. I've got one on order to go camping and whitewater kayaking all over creation. I'm looking forward to end of July 2018 for the take over. We have lots of subie owners here due to the rainy weather and the mountains. I just needed a bigger car to stow my boat, camp in, and to shuttle a carload of adults. After I owned a legacy wagon in the 1990's when the 4WD as shifted in I never found better traction on any other car. I had to have another Subie after I did a 360 and a 190 spin on an off ramp in my little Kia Spectra on a rainy Tues. in February on the way to work.LOL! :)

LG's New EV Battery Plant Is a Welcome News for Tesla
Tesla Giga Berlin's New Hurdle: It's Not Only the Gov't, but Now Tesla Itself
END_OF_DOCUMENT_TOKEN_TO_BE_REPLACED