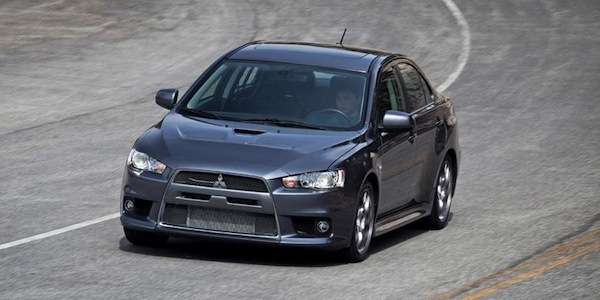 Lancer EVO X fans show Mitsubishi the way: Will Mitsubishi get a clue?

The 2014 Mitsubishi Lancer and 2014 Lancer EVO X had near record sales in March. Will Mitsubishi get the message?
Advertisement

Mitsubishi is determined to rebrand their image completely and have said they will drop the 2015 Lancer Evolution after this model year. But sales of the 2014 Mitsubishi Lancer and 2014 Lancer EVO X shows there is strong demand for the performance car. Mitsubishi isn’t axing the Lancer Evolution because of lack of customer interest. But the Japanese automaker is hell-bent on going a different direction and making their entire lineup eco-friendly.

The numbers for March tell us a story of passion and devotion to the Mitsubishi Lancer and Lancer EVO X performance model. Mitsubishi reported astounding 2014 Lancer sales that were up 72.4 percent for the month. It was the best month of sales for Lancer since August 2008. And 2014 Lancer Evolution sales were up 27.1 percent for the month and are up 15.3 percent year-to-date.

Those numbers tell us that Lancer and Lancer EVO X is more popular than ever and performance fans are snatching up the two models faster than ever. 2014 Lancer EVO X fans are showing Mitsubishi the way they need to go with the Rally-bred performance model. Why can’t the Japanese automaker see that the Lancer Evolution can be a flagship model for the brand and give it an identity that will keep it in front of all buyers and make their dealer network stronger? The want to rebrand their entire lineup to become more eco-friendly.

Mitsubishi is doing well here in the U.S. with their new U.S.-built 2014 Outlander Sport and all-new Mirage. With strong sales of Lancer and Evolution X, Mitsubishi saw historic March sales of 8,996, a 70 percent increase over the March 2013 total. It was the best single month of sales for Mitsubishi since August 2008, and also the best March sales in six years.

The Lancer and Lancer Evolution certainly don’t equate to the bulk of the March sales, but what the performance models do, is get buyers in the showrooms. Just like Mercedes and Subaru know for their performance models, buyers will come in to look at the flagship models but end up buying another car in the lineup. It’s smart marketing as it gets buyer interest up across the board.

MMNA EVP of Sales, Don Swearingen even see’s that it takes an entire organization working together. "We're extremely pleased to see what we can do when the entire Mitsubishi organization puts it all together for a month." He gives credit to their safety and fuel-efficient cars, but fails to recognize the role the performance model played in March sales.

He went on to say, "We are encouraged that consumers are proving that the mix of safety and fuel efficiency that we're offering in our brand is what they want. We're going to start our new fiscal year with a bang in April by upping our advertising exposure and continuing extremely attractive incentives for customers who visit our showrooms and see what all the excitement is about."

There is excitement for the brand, but there would be more if Mitsubishi would continue with a performance model that would drive even more customers into their showrooms. The 2014 Lancer and Lancer EVO X fans are showing Mitsubishi the way. Will Mitsubishi get a clue, or will they kill the performance car after the 2015 model year?