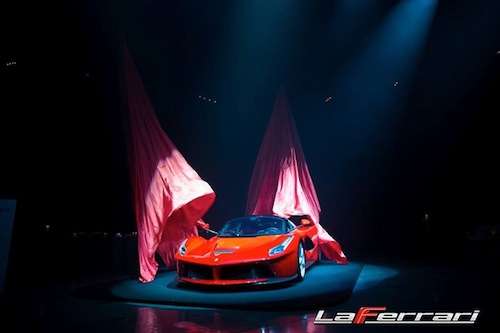 The new Ferrari LaFerrari continues to wow fans and was unveiled for a very select group of owners and enthusiasts in Japan. Is this Ferrari's new marketing strategy?
Advertisement

The all-new Ferrari LaFerrari continues to wow fans of the newest limited special edition model of the Prancing Horse. The first hybrid supercar from Ferrari is making its way around the globe after making its global debut in Geneva in March. In April, the supercar was unveiled in China at Auto Shanghai 2013, and now for an exclusive group of selected owners and enthusiasts in Japan, the new LaFerrari was shown for the first time. Why did Ferrari choose to show the new Hybrid supercar to just a select few in Japan?

Ferrari didn’t even disclose the location of the unveiling and said it was in an exclusive setting in the center of Tokyo where the first hybrid supercar appeared for the first time in Japan last night. After huge crowds have gathered in Geneva and Shanghai, it’s a bit unusual that Ferrari would limit the debut in Japan to just a small gathering of selected owners and enthusiasts. Or could this be Ferrari’s strategy moving into the future?

The LaFerrari supercar is ultra-exclusive

Because the supercar will be limited to just 499 examples, Ferrari knows there will be just a few examples available for their most loyal Japanese customers. “Japan’s passion for supercars goes back a long time and we are happy to be able to give our most loyal customers the most powerful car ever built by Ferrari,” said Herbert Appleroth, the President and CEO of Ferrari Japan.   The limited number of guests at the event were also treated to a special exhibition called “Supercar Chronicle,” which brought together all the previous supercars from the Prancing Horse’s illustrious past. Ferrari brought the 288 GTO, the F40, the F50 and the Enzo. After that came the unveiling of the LaFerrari “in an refined and elegant ceremony.”

Prancing Horse strategy for the near future

This is all part of Ferrari’s plan moving forward. Ferrari plans on building fewer cars in 2013 so they can continue to maintain their exclusivity. In an interview this week with Business Week, President Montezemolo said, “We have fantastic customers and we need to give them something they cannot get anywhere else. Ferrari has to go further than every other car manufacturer in the world in terms of its sales figures, quality and exclusivity and it must be able to generate income with unique additional services.”

Even though the demand for Ferrari’s around the globe is greater than what they can produce, The Italian automaker is choosing to limit production. “That is why we have decided to reduce the current production,” underlined Montezemolo. “We will build fewer than seven thousand cars, even though the market could absorb many more.” In Japan last night, we might be seeing how Ferrari will only show their limited production models to a select few customers after the initial global debut.

An even more exclusive model is on the way

This seems to be the strategy of the Prancing Horse in the near future. During the presentation of the LaFerrari, Chairman Luca di Montezemolo said, “It is the highest expression of excellence of our company: technological innovation, performance, futuristic style, driving pleasure. It is an extraordinary car, destined to our collectors.