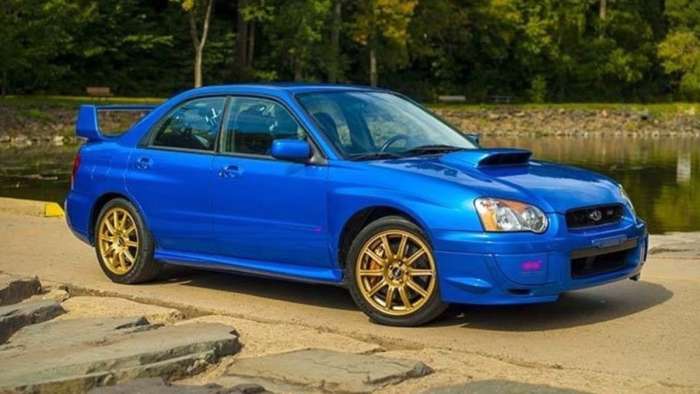 If you own a 2004-2007 Subaru WRX STI you should hold on to it. Hagerty says it’s going to be a collectible.
Advertisement

The first-generation Subaru WRX STI was an instant hit with performance fans when it arrived on U.S. shores in late 2003, and it’s still popular today. You still see lots of older STIs on the road with their loud rumble annoying the neighbors. If you own a 2004-2007 Subaru WRX STI you should hold on to it and don’t sell. Hagerty released their “hot list” of future classics and the first-gen Subaru STI made their 2019 Bull Market List 10 Best Collector Cars to buy this year. They say it’s destined to be a highly-collectible model.

The 2004-2007 STI had bigger wheels than the iconic WRX, a big wing, suspension upgrades, and a 2.5-liter flat-four with 14.5 psi of boost to make 300 horsepower and 300 pound-feet of torque in a car weighing 3300 pounds. If you were lucky enough to get a WR Blue Pearl exterior paint with Gold BBS Alloy wheels, it could be the one worth the most today.

Hagerty says, “The real-life versions of the cars we played in Need for Speed were too expensive for the kids who wanted them. But as those kids became adults and made money, the cars got older and cheaper. Good examples are hard to find today, but they are that much more valuable.”

So keep your first-generation Subaru WRX STI because it’s a good bet the price will continue to go up, especially if you have a good clean original example. A 2004 WR Blue Pearl with Gold BBS Alloy wheels could be the one worth the most.

Joshua Simer wrote on January 15, 2019 - 10:58am Permalink
"Hagerty values the 04-07 STI at $25,700-$33,700 today." Maybe if you have one that's never been driven and has been stored properly it could be worth $25.7K, but Blue Book and (more importantly) actual listings on web sites of actual cars with actual miles don't even get close to that, let alone $33K. There's one listed at $27K but that claims to have extensive modifications including 700whp, so not a very useful data point for one that's stock or mostly stock. I hope you're right because I'd love to get $25.7K for mine, but that's not happening.
David Meier wrote on May 13, 2022 - 8:38pm Permalink
If you have a clean, stock car that has been taken care of (like my 2005 has been) and not rat bagged, modified, or raced like most young guys do with WRX STIs I would expect $25-30K would be a reasonable price. I wouldn't sell mine even @$40K
Alberto Guerrero wrote on January 24, 2019 - 11:47am Permalink
What about a wrx sti 2005 with a new stock short block with low miles on the chassis.
Eric Butterfield wrote on September 6, 2019 - 11:51am Permalink
I bought my 2005 WRX/STI in Aspen white with gold rim new off the lot when I was 38 years old. Its only got 88K miles as it was my second car diving under 7K a year. I did some tasteful bolt on mods and had actually been looking to sell as my now driving daughters aren't that into the car. MSRP was $35,185 I had some rarer options STI Optional performance gauge pack $740 STI Optional arm rest extension $128 STI Optional Titanium Shift Knob-6MT $179 (ebay list for $400) STI Optional Short throw shifter $449 Optional Subwoofer/Amp $273 Option Auto dimming compass mirror w/homelink $268 Option security system and wheel Locks $274 So I bought it for $37,495.00 (w/o T,T&T) and waited 4 months for the build Tending KBB and NADA I watched the number start climbing over the last year. KBB now shows excellent cars being $16,406 - $20,840 With average price of $18,669 out here in Nevada Non optioned No of part outs and junks are up as well These production number really tell the missing story, never saw a high number on the street, but never would have guessed there were less than 28K GD chassis cars sold, these number are is like R34(I think 18K sold) or NSX production numbers (of 8K over the years). Super clean examples of a low mile, one owner Subaru Impreza WRX/STI. This coveted year car four years GD-chassis run has been modified to a bolt on "stage 2". It retains the stock turbo with only tastefully executed airflow and suspension upgrades. It has a cold air inlet, a turbo back stainless exhaust and suspension enhancements. I added Snows Performance methanol/water injection kit tuned with air flow controller, and a Cobb Accessport (new V3) mainly for compensating for only 91 octane gas available near home instead of the designated 93 as recommended. Not sure I will ride out the trend as I got an offer for 20K last week but the car wasn't even washed. I think it trend hold about 1 k a year holds and get to the $25K numbers in another 5 years. The Hot buyers should be around for another 20 years at least. Guy who approached me was 27 years old.
Cris wrote on February 5, 2020 - 4:28pm Permalink
Hi, what about a 05 Impreza 2.5 RS sedan? Do you think I should hold on to it?
Erik wrote on January 2, 2021 - 6:26am Permalink
Yes it’s gonna be one of those classics everybody wants in 5-10 years. Just keep it in great shape!