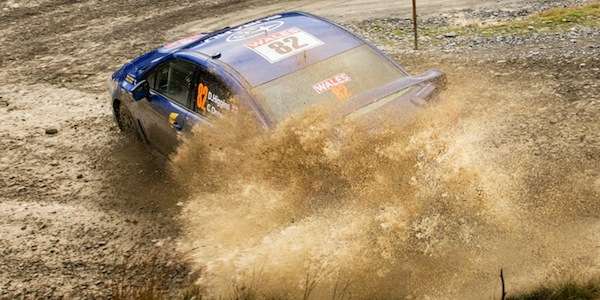 The conditions were extreme at Rally GB. How did the Subaru NR4-spec WRX STI do in the monsoon conditions?
Advertisement

After years of racing in the U.S., David Higgins and Craig Drew were able to compete in a Subaru WRX STI on their own soil. They went to the Rally GB to honor the late rally legend Colin McRae, and came away with a top 20 finish against much faster rally cars. How did the Subaru NR4-spec WRX STI do in the monsoon conditions?

The 2015 Subaru WRX STI with David Higgins and Craig Drew was the first rally car to drive over the start ramp, and Colin's father, Jimmy McRae waved the start flag for the #82 Subaru STI to officially send the team off. Higgins and Drew felt at home in the slippery wet conditions, and held their own competing against the fastest rally machines on the planet.

The Subaru NR4-spec WRX STI is essentially a slightly modified showroom STI as Group N (NR4) specification allows for a few safety modifications like a roll-cage, fuel cell, seats and belts. The car runs a factory engine, transmission, driveline, and most suspension parts. The only performance enhancements that are allowed on the cars are essentially dampers, brakes, and underbody protection.

The Subaru WRX STI proved its all-wheel-drive capabilities at Rally GB as the conditions were wet, muddy and treacherous in some places. Day 2 of the Wales Rally GB saw conditions deteriorate throughout the day ending in full monsoon conditions with 40-60 mile per hour wind gusts. The 2015 Subaru WRX STI piloted by Higgins and Drew ran perfectly all day only needing tires and fuel.

The NR4-spec WRX STI was able to handle the extreme conditions with heavy rain, and in some locations intense winds, and powered through the mud and slick conditions without any problems. The team completed the difficult 3 Day Wales Rally GB this weekend with an impressive top 20 overall finish. The STI proved its ability to compete against much faster cars in extreme conditions. Subaru Rally Team USA who managed the race said, “For a production car to place in the top 20 among the worlds best is simply amazing.”

After the finish, David Higgins commented, “Our Subaru ran very well and the team did an excellent job pulling this project together. Having a Subaru back in action at the WRC was brilliant and seeing the response from the crowd made it all worth the effort. We had a great event and this was the perfect way to finish off our season!”

SRT USA went to Rally GB to honor the late rally legend Colin McRae, and the Subaru WRX STI came away with a top 20 finish against much faster rally cars. The new-generation STI proved its all-wheel-drive capabilities at Rally GB in extreme conditions this weekend.