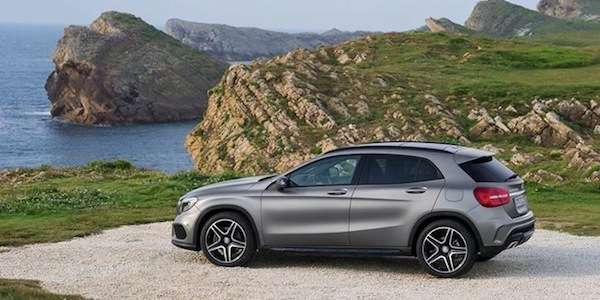 How the 2015 Mercedes GLA-Class caters to driving enthusiasts

The all-new 2015 Mercedes-Benz GLA-Class will arrive in the U.S. this fall. Why will it appeal to driving enthusiasts?
Advertisement

The 2015 Mercedes-Benz GLA-Class is a luxury compact SUV that will appeal to driving enthusiasts because it has a generous power-to-weight ratio. The standard GLA-Class comes with enough power to satisfy the performance fan, and that’s before AMG gets their hands on the new GLA compact SUV. It stock trim, GLA-Class gets a 208-hp turbocharged four-cylinder engine, but it’s the torque that will get this luxury compact moving.

Driving enthusiasts will appreciate the 2.0-liter gasoline 208-hp turbo engine, but the GLA-Class powerplant also comes with 258 lb-ft of low-end torque that our enthusiasts will surely appreciate even more. Torque is what gets a car moving from a standing stop, and this has enough torque to get the GLA moving quickly. GLA weights in at kg (3,487 lb), and that's a high power-to-weight ratio, and the GLA250 4MATIC sprints from 0-60 mph in only 6.4 seconds

The Mercedes-Benz four-cylinder engine comes with turbocharging and direct injection, as well as an ECO start/stop function as standard, that also makes for good efficiency. The new GLA-Class has outstanding performance figures in this segment.

The 2015 GLA250 4MATIC has a top speed of 145 mph. The engine is mated to a 7-speed dual clutch automatic transmission that contributes to the GLA’s sportiness. The new luxury compact SUV gets a progressive design that will allow new Mercedes buyers to use it for daily commuting during the week, and use it for recreation on the weekends. It’s small and compact enough for city commutes and robust enough with 4MATIC all-wheel-drive for off-road adventures. Young millennials will be drawn to the new compact SUV who lead active lifestyles.

For those wanting the ultimate GLA performance machine, the GLA 45 AMG features the most powerful series-production four-cylinder engine in the world and pumps out 265 kW (360 hp) and 450 Nm on the road. The GLA 45 AMG runs like a true performance SUV. It accelerates from zero to 100 km/h in 4.8 seconds and reaches a top speed of 250 km/h (electronically limited). And it comes standard with a performance AMG 4MATIC all-wheel drive and the AMG SPEEDSHIFT DCT 7-speed sports transmission. For those wanting the ultimate performance compact luxury SUV, this is it.

-hh wrote on July 17, 2014 - 3:20pm Permalink
I was very seriously looking at the GLA this past spring as I was looking for a replacement to my very beloved old Mercedes C-Class Coupe (hatchback, really). Unfortunately, what I found was that Mercedes decided to follow BMW into the realm of reduced product reliability of run-flat tires. I've found far far too many coworkers/friends have had too many failures (one had 17 blowouts in 2.5 years) to consider run-flat technology to be adequately reliable. Because of run-flats, the GLA was crossed off of my shopping list. Ditto BMW too. I took delivery last month on a Porsche Macan S. True, it is substantially bigger/taller than what I really wanted. True, it cost more. And I've already found that it isn't as fun of a drive as my C-Coupe has been (which I still have). But in its favor, it does not have run-flat tires. I did consider buying and then immediately swapping out the runflats for conventional tires, but the traditional spare tire wheel has also been eliminated. I did contemplate running without a spare as a 'safety net', but because I found competitor products who chose to keep the "old" and more reliable technology, I didn't have to make that compromise. FWIW, my backup (#2) choice was the Audi Allroad, which is effectively a raised A4 Avant - - my main complaint about it was that Audi did not employ a sound deadening panel over the rear wagon area ... having a panel behind the rear seat typically cuts interior cabin NVH by around -2.5dB. -hh