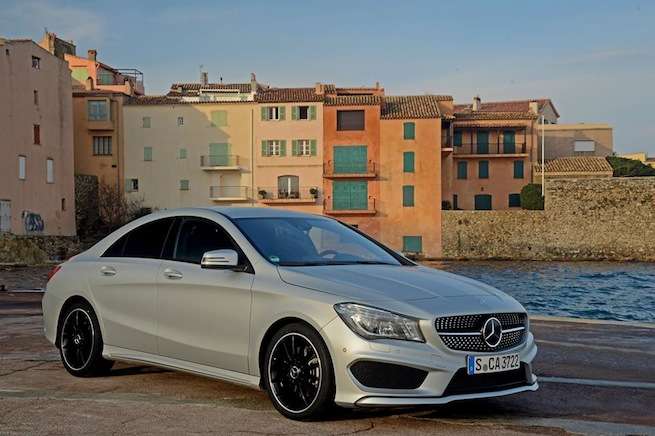 Mercedes-Benz released sales numbers for October and the recently launched 2014 CLA-Class is a real star for the brand. Chief rival BMW is seeing Mercedes closing in fast.
Advertisement

The sporty 2014 Mercedes-Benz CLA-Class four-door coupe is not only a head-turner, but it’s quickly becoming a real star for the German automaker. Mercedes-Benz USA announced sales for October, and the new CLA-Class is already a big success after it’s first full month. The new four-door coupe is Mercedes lowest-priced car in the U.S. and it’s attracting new buyers to the brand. Sales of MBUSA’s newest star was in the top three for all Mercedes-Benz vehicles at 4,895 units. Only the C and E-Class outsold the CLA.

“It’s been an extraordinary year for the brand, embodied in two cars— the CLA and the S-Class —as stunning as they are technologically fit,” said Steve Cannon, president and CEO of MBUSA.  “More importantly, October sales show they’re resonating with customers.  The recently-launched CLA is already one of the top volume models and our flagship S-Class, just rolling into dealerships, is up 75%.  With sustained momentum and compelling product across the model range, we’re looking toward a record finish in the final stretch of 2013.”

It looks like the new CLA will help Mercedes catch their rival BMW in luxury car sales. According to a report from Bloomberg, Mercedes was able to widen its year-to-date lead over BMW to 4,986 vehicles, from 2,491 through September. Mercedes has a goal to be the number one luxury brand in the world by 2015 and it looks like they are right on track. They can see BMW’s taillights and they are closing in fast.

This years tally stands at 245,125 for BMW to Mercedes-Benz 240,139. So Mercedes is closing in on BMW and looking to end the Munich-based carmakers two-year reign in annual sales. Many are surprised at how successful the CLA has been in such a short time. But the new four-door coupe is arriving at the right time as many millennials are looking to purchase their first luxury vehicle.

The reception from these first-ever Mercedes buyers has been very positive as the German automaker has included the very attractive styling and high-tech infotainment systems this generation is looking for.

The Bloomberg report says the BMW status as the leader in sales in 2012 was based on reported sales. But vehicle registrations tell a different story. Mercedes-Benz actually topped BMW last year, according to researcher R.L. Polk & Co.

Keep your eye on Mercedes as they continue to launch new luxury compacts like the 2014 CLA-Class and new 2015 GLA luxury compact SUV next year. BMW is looking in their rearview mirror and seeing Mercedes gaining ground quickly.