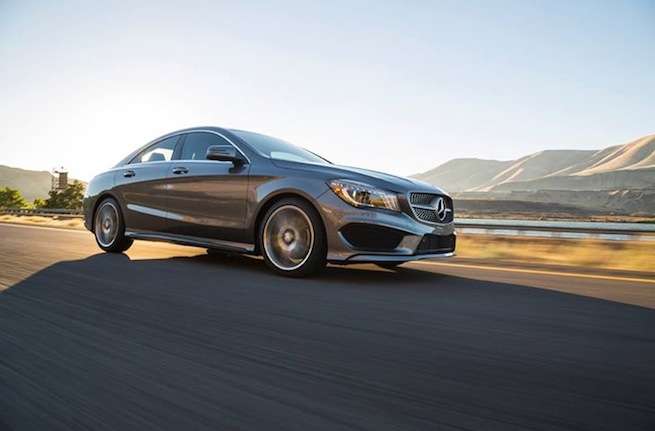 Brilliant Mercedes CLA shows why the brand will be number one

The all-new 2014 Mercedes-Benz CLA250 has finally arrived here in the U.S. with a low starting price and high fuel-mileage.
Advertisement

Mercedes is launching a global offensive with their new premium compacts and the new CLA250 is creating a new buzz for the brand and it has finally arrived on U.S. shores. Mercedes has released pricing and fuel-mileage numbers for the highly-anticipated 2014 CLA250 and both are impressive.

Mercedes said the new CLA-Class was one of the world’s most aerodynamic production vehicles, and it translates to some real-world numbers that prove what the German automaker has been saying. The new CLA250 also comes with a long list of standard features at a price below $30,000. How will it propel Mercedes to number one status in the world?

Mercedes has released the EPA fuel-mileage estimates and tell us the new CLA will get 38 mpg on the highway. They didn’t release city estimates but the highway mileage is excellent for the four-door coupe. Mercedes expects the new CLA-Class to have a major global impact and it’s already off to a good start. The brand is staging a major comeback and they are attacking the premium compact market in a big way.

Mercedes CLA is part of a major makeover

Both the new CLA-Class and soon to be launched 2015 GLA compact SUV are part of the one of the biggest makeovers in the auto industry. Mercedes has a goal to overtake Audi and BMW to be the number one luxury brand in the world by the end of the decade. And they are not finished yet. Mercedes plans to bring out 13 all-new vehicles over the next eight years.

The new CLA-Class is designed to woo younger customers to the brand who have never considered a Mercedes vehicle before. Gorden Wagener, at age 45, became the youngest chief designer at Mercedes-Benz in 2008 and has been influential to boosting the brand’s appeal. In a story from the Washington Post, he was quoted, “The styling of the new models represent a shift in paradigm. We radically changed the design language to make it super clean and pure in line with our philosophy, which we call sensual purity.”

Along with a great new design, the CLA250 will come with many standard features. The 2014 Mercedes CLA250 will have an MSRP starting at $29,900 plus $925 destination. It will come standard with HD Radio, Hands-free Bluetooth interface, Sport front seats, 14-way front seats with memory, Split-folding rear seats and ambient interior lighting.

Mercedes delivered a record 108,417 cars globally in August and is outpacing rivals Audi and BMW. The German automaker’s gains are being fueled by the A-Class hatchback, van-like B-Class and new CLA four-door coupe in Europe. As the all-new 2014 Mercedes-Benz CLA250 launches here in the U.S., look for the new aerodynamic premium compact to help propel Mercedes toward their goal to be number one.

Stay tuned to Torque News for all the latest Mercedes-Benz news.