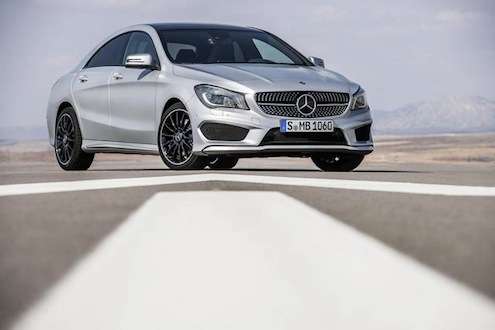 The all-new Mercedes-Benz 2014 CLA is launching around the globe and Mercedes is counting on the luxury compact help the brand regain the top luxury crown over rivals BMW and Audi.
Advertisement

The luxury car battle is heating up as Mercedes starts deliveries of the all-new 2014 CLA four-door coupe in Europe this month. Mercedes-Benz plans on the new luxury compact to help the German automaker get back the top luxury brand ranking they lost to BMW in 2005. In 2011, Mercedes slipped to third place behind Audi and has stayed there the last two years. Mercedes knows they have to compete with the BMW 3-Series and Audi A4 to be able to get back the top spot again. Who will Mercedes market the new CLA Class to as it launches around the globe?

Mercedes knows that the new 2014 CLA will need to target a new generation of buyers who have never purchased a Mercedes product before. According to Automotive News Europe, the European market is slumping and Mercedes plans to update its 2013 forecasts later this month after many car and truck markets started the year weaker than expected and Europe showed no signs of recovery.

Mercedes will be more youthful and sporty in the future

Mercedes will be launching the new 2014 CLA globally and will attract a new generation of buyers in their 30s and 40s in the U.S. In the past, Mercedes-Benz has been known for its well-built cars but were designed to appeal to a different demographic. They were known for their elegance and grace more than being sporty and youthful. How will Mercedes attract a younger buyer with the new CLA? A younger generation of buyers is looking for sporty, compact and with a new modern design. Both BMW and Audi have done an excellent job of marketing their brand to this group of buyers. They are young, well-educated and sophisticated when it comes to the automobiles they want. Mercedes knows they will have to reach this generation of buyers as they move into the future and the new CLA is the answer. The new CLA Class is the vehicle that will launch Mercedes in that direction.

CLA will launch in U.S. and China

Mercedes will launch the new CLA Class in the U.S. in September, and will also target the largest auto market in the world next February when they launch in China. Mercedes has made a good marketing move in keeping the CLA's price in the U.S. under $30,000 and will attract the 30 to 40-year-old buyers who have never purchased a Mercedes product before. And like BMW and Audi, Mercedes-AMG will offer a performance variant CLA 45 AMG to appeal to the younger performance buyer.

Daimler CEO Dieter Zetsche knows he is a race for the top luxury brand spot that will take moving the company in a new direction. "We want to beat the competition, on a permanent basis," Zetsche said on April 10 at the company's annual shareholders meeting in Berlin. "The course we have set is the right one. We will follow it undeterred by the ups and downs of the markets."

Mercedes CLA will be volume leader

Automotive News Europe says Zetsche is under pressure from investors to show progress in his effort to regain the lead in luxury cars. Mercedes has fallen further behind BMW and Audi since the CEO vowed in 2011 to overtake his rivals by the end of the decade. Mercedes is planning on the new CLA four-door coupe to be the volume leader in their lineup. "From a volume point of view, the extended compact car family will become our biggest model line," said Joachim Schmidt, sales and marketing chief for Mercedes. "And the family will expand further in the next generation."

The Mercedes plan is to undercut the price of BMW and Audi with the CLA in the United States. The Mercedes CLA starting price at $29,900 for a 211 horsepower model compares with $32,550 for a BMW 3 series with 180-horsepower and $32,500 for Audi's A4 producing 211 horsepower. Look for the new 2014 Mercedes-Benz CLA to be the beginning of a new era for the German automaker as they attempt to regain the luxury car lead.

Anonymous wrote on April 14, 2013 - 8:33pm Permalink
As a former fan of MB and with 15 years of low/unreliable parts/design quality history, customer cash cow stupid treatment, and deaf ears from MB corporate offices, Mercedes is going to have to do a lot better than just changing models every couple of years to escape reliability surveys and customer complaints. BMW is years ahead of Mercedes in all those areas. Good luck though changing the bad MB culture of the last decade. I would like reliability and dealer honesty as part of the MB rebirthing..