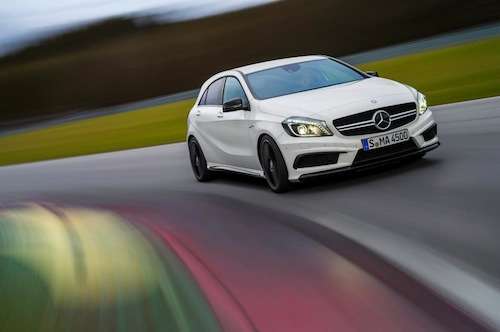 For the first time, Mercedes-Benz is offering a new high-performance car in the compact class, the 2014 A 45 AMG, and it is impressive.
Advertisement

A new global era has dawned at Mercedes-Benz and for the very first time in the German automakers history, they are offering a new high-performance car in the compact class. We knew late last year that Mercedes was bringing out the new 2014 A 45 AMG. The all-new A-Class luxury compact has been a huge success in Europe and the new high-performance 2014 A 45 AMG takes the luxury compact to another level. Mercedes tells us “it will blow your mind and impress with stunning performance.” Just like many new performance cars like the new 2014 Audi S3 Sportback, the A 45 AMG will likely be a European launch only.

When Mercedes-Benz launched the all-new A-Class, it opened up a new chapter in the luxury compact segment, and represents an important lineup for the German automaker. Mercedes was counting on there being a demand for a luxury compact and they were right. It resonated so well with buyers, that since the start of sales in mid-June in Europe, more than 40,000 cars were ordered before the first car rolled off the assembly line. Now Mercedes is adding the new high-performance version with the AMG 2.0-liter four-cylinder turbocharged powerplant with 360 horsepower and 295 lb ft of torque.

The most powerful four-cylinder engine on the planet

Mercedes AMG has done it again by putting incredible power in a production vehicle. The 2014 Mercedes-Benz A 45 AMG will be the most powerful series production four-cylinder engine in the world. AMG has taken their decades of experience and applied it to the new compact A-Series. The new A 45 AMG will inherit the corporate DNA and embody the AMG brand claim "Driving Performance."

"With the new A 45 AMG we have well and truly achieved our aim of developing the most dynamic, powerful and efficient four-cylinder series production car," comments Tobias Moers, Head of Overall Vehicle Development and Board Member of Mercedes-AMG GmbH. With its impressive high-tech package and the performance-oriented AMG 4MATIC all-wheel drive, the A 45 AMG is a thoroughbred AMG through and through."

Mercedes appeals to a new generation

Mercedes has opened up a new chapter in the luxury compact segment and represents an important milestone in the companies future. The A-Class brings a new sporty five-seat hatchback model to the luxury compact segment, and it’s matching the heartbeat of a new generation of buyers. The new 2014 A 45 AMG takes the segment to another level and will appeal to the youngest AMG clientele to date. Mercedes will target predominantly urban buyers who are 30 to mid-40 age group with an agile high-performance vehicle.

The high power 2.0-liter turbo engine combined with the standard AMG 4MATIC all-wheel drive will lead to extreme performance. The 2014 A 45 AMG accelerates from zero to 100 km/h in 4.6 seconds, with a top speed of 250 km/h (electronically limited). The A 45 AMG engine also leads its segment with fuel consumption of 6.9 litres per 100 kilometres in NEDC combined mode. This is accompanied by particularly low exhaust emissions: the A 45 AMG already complies with the EU6 emissions standard which is not scheduled to enter into force until 2015, combined with the limit for the particle count per kilometer of 6 x 1011 which will be mandatory from 2017.

Mercedes AMG accomplishes both power and efficiency with the use of a twin-scroll turbocharger, maximum derestriction of the exhaust system and an innovative injection strategy. The small 2.0-liter powerplant is incredibly powerful and the twin-scroll technology also benefits fuel consumption and exhaust emissions. At a maximum charge pressure of 1.8 bar, the AMG 2.0-liter four-cylinder turbo engine also leads the field in this respect.

In keeping with all AMG engines, the new AMG 2.0-liter four-cylinder turbo engine is also hand-built according to the traditional AMG philosophy of "one man, one engine". The AMG engine plate bears the signature of the responsible engine tech who hand builds each engine. The turbocharged engine will be mated to a performance AMG Speedshift DCT 7-speed sports transmission. Mercedes claims the strengths of the AMG DCT sports transmission include spontaneous gear shifting without any interruption in tractive power, a tailor-made control strategy, extremely smooth and easy gear shifting and a high level of efficiency.

Look for the the world premiere of the 2014 Mercedes-Benz A 45 AMG to take place at the 2013 Geneva Motor Show in March. The sales release date will be April 8, 2013; the market launch in Germany will begin this June. Once again, Americans can look but can't touch.

Watch the 2014 A 45 AMG in action in the video below to really believe it.