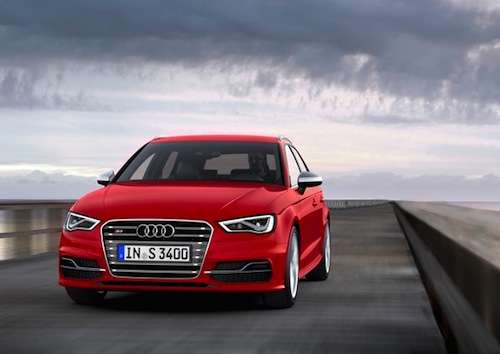 The Audi A3 was a completely new model when it was revealed last year and will arrive in the U.S. later this year. Audi has just revealed the new performance 2014 Audi S3 five-door Sportback with a new engine and more horsepower. It isn’t certain if the new Sportback will be sold in the U.S., but it’s not likely we will see the new performance S3 anytime soon. Again, we in the U.S. only get to be teased with another sport model from Europe and can be enticed with its performance goodies. Audi has revealed the new 2014 S3 will come with a reworked 2.0-liter four-cylinder with more horsepower and better fuel-efficiency.

The new high-performance 2.0-liter TFSI gasoline engine in the 2014 S3 Sportback has been completely overhauled. It boasts an output of 300 horsepower and 280 lb ft of torque. It will sprint from 0-62 in just 5.0 seconds and will do it with five doors for better grocery hauling capability. Top speed is electronically governed at 250 km/h (155.34 mph). Audi says the new S3 Sportback will offer best-in-class performance and efficiency with fuel mileage of just 6.9 liters per 100 km (34.09 U.S. mpg).

The new high-performance four-cylinder engine's 300 horsepower is available throughout the torque curve from 1,800 to 5,500 rpm and should be a driving enthusiasts car. The 2.0 TFSI provides new technologies, ranging from dual injection through the Audi valvelift system and an exhaust manifold integrated within the cylinder head to innovative thermal management. The Germans know how to tease us with their sporty models and then say we can look but not touch. The new S3 will officially be unveiled at the Geneva Auto Show next month for the world to see.

The 2014 S3 will be using the new VW Group MQB architecture, or "tranverse modular system" platform. The new universal architecture design will allow Audi to incline the engines rearward 12 degrees reducing front overhang by two inches while creating more front passenger legroom as the front axle can move forward now by 1.6 inches. The new reworked engine is 11 lbs lighter than the previous generation powerplant which contributes to its improved performance.

The new performance 2.0-liter engine comes mated to either an optional six-speed S tronic, or a six-speed manual transmission. Audi features Launch Control which delivers the engine's power to the road with “defined tire slip.” The dual-clutch transmission can be controlled via optional shift paddles on the steering wheel and offers the automatic modes D and S in addition to manual mode.

Audi’s Quattro permanent all-wheel drive is available on the new 2014 S3 for maximum traction in either dry or wet conditions. It also gets an S sport suspension which lowers the body by 25 millimeters (0.98 in), the axle-load distribution (59% to 41%, front to rear) and new progressive steering that contributes to its sporty handling. Black and silver calipers with S logos peak through the 7.5 J x 18 wheels wrapped in low-rolling-resistance 225/40-series tires to help lower fuel consumption.

The performance five-door S3 features a lightweight platform and body that also contributes to the dynamic performance of the Audi S3 Sportback. This five-door car has a curb weight of 1,445 kilograms (3,185.68 lb) – 70 kilograms (154.32 lb) less than the previous model.

The premium compact segment is filling up and the new 2014 Audi S3 Sportback will be getting competition from the Volvo S40, and the all-new Mercedes-Benz A 45 AMG. Look for the new S3 to be officially unveiled in Geneva next month as the Europeans get another sporty vehicle that Americans can only dream about.

LG's New EV Battery Plant Is a Welcome News for Tesla
Tesla Giga Berlin's New Hurdle: It's Not Only the Gov't, but Now Tesla Itself
END_OF_DOCUMENT_TOKEN_TO_BE_REPLACED