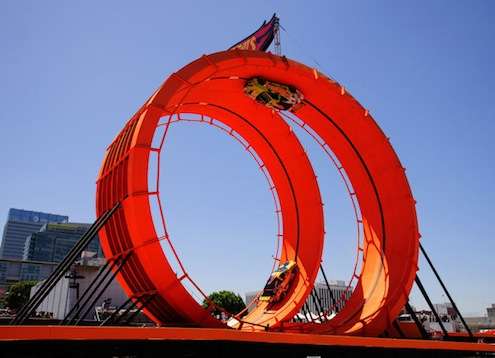 Greg Tracy, who is a top Hollywood stuntman, won the challenge as he edged Yellow Team Driver Tanner Foust. Foust is an accomplished driver himself, and is a three-time X Games gold medalist. Most kids grew up with Hot Wheels toys and this event at the Los Angeles X Games 2012 gives kids of all ages the chance to see the game brought to life.

“Boys of all ages around the world imagine playing with Hot Wheels on a life-size scale – and our vision with Team Hot Wheels was to transform this fantasy into reality,” said Simon Waldron, vice president marketing, wheels, Mattel. “The Double Loop Dare was truly a can’t-miss spectacle that altered the Los Angeles skyline. Anyone downtown couldn’t miss this massive six-story-tall bright orange structure — it was unmistakably Hot Wheels.”

The video below shows the Team Hot Wheels Double Loop Dare that was modeled after the track set game. The game is available world-wide and lets kids race their 1:64 scale Hot Wheels cars side-by-side in a vertical loop competition. Like most professional race drivers, both drivers grew up playing with cars like Hot Wheels, and eventually developed a love for racing and took it to real-life racing on the track.

Greg Tracy who won the competition, is a long time fan of Hot Wheels and developed a passion for cars when he was a young boy. “I’ve been a fan of Hot Wheels since I was a little kid, racing cars around my parents’ living room,” said Tracy, a six-time Pikes Peak Champion and a Hollywood stuntman since 1991. “So to be able to be a part of something like this with Hot Wheels bringing one of its toys to life is remarkable.”

Tanner Foust has another world record under his belt by obtaining the longest distance vehicle jump at last year’s Indianapolis 500. Foust, like Tracy, is also a stunt driver and has two Formula Drift Championships adding to his three X Games gold medals.

While the event was broadcast live on ABC and ESPN, you can view the Hot Wheels record-setting Double Loop stunt below.