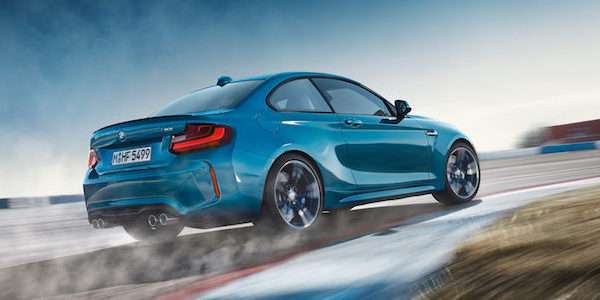 Here’s What Makes the BMW M2 an Emotional Pick

In Japan’s Car of the Year 2017 award, the BMW loses to the new Subaru Impreza compact. Why did it get the “Emotional Award”?
Advertisement

The new BMW M2 didn’t win Japan’s “Car of the Year 2017” award, that one went to one of the countries own, the new Subaru Impreza. The BMW M2 does get the “Emotional Award” from Japan’s COTY organization. Judges gave it high marks for its performance and handling. What makes it an emotional pick?

It was a tough list to go up against in Japan. The list of top 10 nominees (in alphabetical order) were the Audi A4, BMW M2, Fiat 124 Spider, Honda Freed, Jaguar F-PACE, Mercedes-Benz E-Class, Nissan Serena, Subaru Impreza, Toyota Prius and Volvo XC90.

How they score the results

Japan’s COTY organization is made up of 59 jurors who each start with 25 votes and must give their most highly rated vehicle 10 votes. Their remaining 15 votes are then spread across their next best 4 cars. Each juror must vote for 5 cars out of the final Top 10. The Impreza (420 votes) takes the top spot followed by the Toyota Prius (371 votes) and third place goes to the Audi A4 (149 votes).

The M2 is an emotional pick

We test drove the M2 earlier in the year and found out why the performance coupe is an emotional pick. The BMW M2 Coupe is a track star with its high-performance equipment, yet it has everything needed to be an ideal daily driver. It’s affordable, has a driver-focused comfortable cabin and isn’t too extreme for driving on a daily basis. Overall, the new M2 is a sports car you will never get tired of driving. BMW’s engineers got this one just about perfect for the track and as a daily driver.

The BMW M2 also just picked up Car and Driver’s 10Best winner, and wins another award and scores the “Best New Premium Sports/Performance Car” in the Canadian AJAC awards. It’s a great performance car for the price and it’s an emotional pick for many reasons. From the sound of the M2’s inline 3.0-liter six, to the feel the driver gets behind the wheel, there’s a subjective value that just can’t be measured.