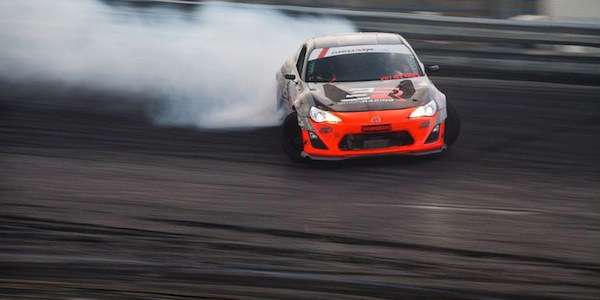 The new 2015 Scion FR-S has arrived and Formula Drift is a big reason why the sports coupe is so popular with driving enthusiasts.
Advertisement

Scion Racing has been around for ten years now and the team is drawing more driving enthusiasts to the 2015 Scion FR-S sports coupe. The team is involved in drag, drift, time attack and rally and its drivers have proven themselves as strong competitors among the best of the best in their respective class. Since 2004 Scion Racing has captured several series championships, race podiums, and broken a multitude of track records. It’s a big reason why Scion FR-S is successful for the Scion brand.

Formula Drift is an exciting motorsport and the last series saw Scion Racing going into the series’ final round competing for its first-ever Formula DRIFT manufacturer’s cup. 2014 Hankook tC driver Fredric Aasbo is leading the team who is currently in second place. If Aasbo wins the driver’s championship, it would lead to Scion Racing’s first Formula DRIFT Cup.

Aasbo has been hot all season, and the most recent win at the Texas Motor Speedway in September continued his successful run. At Texas Motor Speedway, Aasbo and the team went head-to-head with the series leader who hit Aasbo’s tC, forcing the team to scramble to fix the vehicle before the finals. The final event will be held at Irwindale Speedway in Irwindale, California this week and is shaping up to be just as exciting. Aasbo will join 2014 GReddy Scion FR-S driver Ken Gushi in California for the final.

Scion does a great job of marketing and will bring the all-new Yuza-colored 2015 Scion FR-S Release Series 1.0 to the track for fans to check out. The sports coupe was unveiled earlier this year at the New York International Auto Show. Toyota Racing Division (TRD) put their stamp on the new 2015 Scion FR-S Release Series 1.0 and it comes with a few upgrades that sets it apart from the standard FR-S sports coupe.

The exterior of the Scion FR-S Release Series 1.0 features a unique Yuzu-colored exterior with HID Headlamps with LED Daytime Running Lights. On the inside, the special edition model features Dual-zone Automatic Climate Control, a Smart Key with Push Button Start and TRD Shifter-plate with sequentially-numbered TRD badge. Only 1500 examples will be built for the U.S. market.

Other TRD enhancements include TRD Quad Tip Exhaust System and TRD lowering springs. The aero kit with a rear spoiler and side fender garnish make the sports coupe look cool, and each rear-drive coupe comes with its own special release series badge (1 of 1500) inlayed on its brushed aluminum shifter surround plate.

Fans at the track will be able to enjoy a Scion Racing display, including the opportunity to check out the limited edition 2015 FR-S Release Series 1.0 sports coupe. Landy Joe, Scion auto shows and special events manager said, “A winning driver and manufacturer’s cup would reward all the Papadakis’ team’s hard work and hold up the impressive drifting capabilities of the Scion tC and FR-S.” This new sport is a big reason why driving enthusiasts are drawn to the new 2015 Scion FR-S sports coupe. Fans will get to see FR-S at the Formula DRIFT series finale will take place Oct. 10-11 at Irwindale Speedway in Irwindale, California.