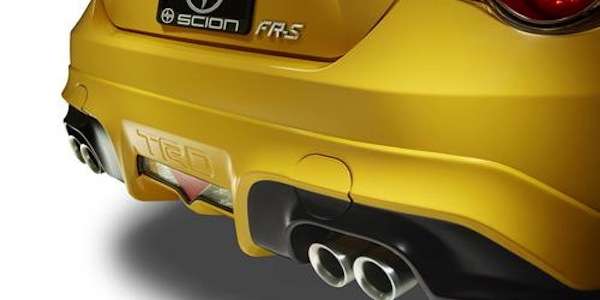 The new 2015 Scion FR-S Release Series 1.0 has been released and is available now. Is it worth the extra $4,500?
Advertisement

The sports coupe was unveiled earlier this year at the New York International Auto Show. Toyota Racing Division (TRD) put their stamp on the new 2015 Scion FR-S Release Series 1.0 and it comes with a few upgrades that sets it apart from the standard FR-S sports coupe. The new special edition 1.0 is priced at $29,990 with a manual transmission or $31,090 with an automatic transmission, excluding $770 for delivery, processing and handling. You can buy a standard FR-S with a manual gearbox for $25,470 plus delivery. What do you get for the extra $4,500.

What doesn’t come with the new FR-S special edition coupe is more important than what it does come with. There are no power upgrades under the hood and it still comes powered by the same 2.0-liter naturally aspirated Subaru Boxer engine. So there’s still no turbocharged model for performance fans to get excited about. But what do you get for the extra $4,500?

The exterior of the Scion FR-S Release Series 1.0 features a unique Yuzu-colored exterior with HID Headlamps with LED Daytime Running Lights. On the inside, the special edition model features Dual-zone Automatic Climate Control, a Smart Key with Push Button Start and TRD Shifter-plate with sequentially-numbered TRD badge. Scion says only 1500 examples will be built for the U.S. market. The Yuzu Yellow exterior isn’t getting too many fans excited. Subaru came up with a World Rally Blue for their special edition that was at least more appealing for sports car enthusiasts.

With only 1,500 sport coupes being produced, TRD and Scion are hoping it will be a collectors item. Scion says the car pays “homage to the sports coupe’s racing roots.” The TRD enhancements are supposed to get fans excited about performance with no power upgrades to go with it. They include TRD Quad Tip Exhaust System and TRD lowering springs. The aero kit with a rear spoiler and side fender garnish make the sports coupe look cool, and each rear-drive coupe comes with its own special release series badge (1 of 1500) inlayed on its brushed aluminum shifter surround plate.

The new 2015 Scion FR-S Release Series 1.0 is available now at Scion showrooms. Does the new sports coupe from Scion take your breath away? Would you shell out an extra $4500 for a Yuzu Yellow TRD-enhanced Scion FR-S 1.0?

Swoops wrote on September 11, 2014 - 11:23am Permalink
I seriously hope the 2016 BRZ or FRS has actual performance upgrades/turbo. I have the 2013 and it handles like a dream. Problem is it is not fast enough even with a perrin full exhaust system and CAI. If they don't make the 2016 with a turbo I am going to have to look at other manufacturers/models. Bummed because it has soo much potential.
Wilky86 wrote on October 15, 2014 - 8:51am Permalink
This is lackluster. I received a call from the dealership offering this up for my 2014 Monogram. With no performance upgrades, I'm gonna have to deny them. You can buy an aero kit and exhaust for 2000. Why would you need to pay 4500 for it? Also, if TRD badging is what you're looking for, it's $100. You can find it anywhere. ONE MORE THING. Need moar power. Either super or turbo the engine. 167 HP to the rear wheels is lacking...a lot. Innovate makes a nice top mount super if that's what you really want and there are tons of turbos on the market that can be installed. Up your game, Toyota. People would just as soon shell out the money on a Mitsu Evo than the 86 because of lack of power. You've got the design and handling right, just finish the job.
frsfan28 wrote on April 9, 2015 - 4:20pm Permalink
I ended up buying one and its worth the 4500 it gets all kinds of attention being theres only a few in the state, sure it could use more power for the price range but I got it because of how it handles, the suspension is great, its good for a drift car low power but good handling for those fun slides. Want a turbo for it you can get one for 4k easily just get you one if you have a frs, if Toyota say puts a turbo on the 2016 the price will jump to at least 38k-42k since the sti sells for 40. its fast enough for what it is
Jim Hagopian wrote on May 22, 2015 - 9:01pm Permalink
I also bought one , (#49 of 1500), after previously owning a 2008 Nissan 350Z & a 2013 Nissan Nismo. Sure the Zs have more HP & Torque but hands down the FRS Series Release 1.0 has much better handling in curves & sharp turns. The RFS is a drivers car. Anyone can go fast on a straight-away. Wanna go over 100 MPH real quick on the street and risk getting a speeding ticket... go for cars with more HP. Wanna enjoy driving windy roads and make super fast turns... get the FRS! You won't regret it.
Matt Collins wrote on June 17, 2015 - 8:51am Permalink
I just bought one of the last 4 available in Canada (we had 75 of the 1500), and had to travel half way across the country to get it. (#366 of 1500). I took the BRZ for a test drive, because we don't have a Scion dealership, yet (coming in July). Loved the car, and the way it handled, but the lure of the Scion limited edition version was too great. Everywhere I drive, people turn their heads, and every time I stop, people are either taking pictures/videos and asking me questions. I was going to buy a Camaro, but this was cheaper and more fun to drive. Sure it doesn't have the power of a Camaro, but with a car this noticeable, that could be a good thing. It has enough for fun. I have a bad back and the seat in this is comfortable. I'm also getting a benefit that I hadn't counted on, phenomenal gas mileage. By the way, some of the people asking questions, and taking pictures were driving Camaros.