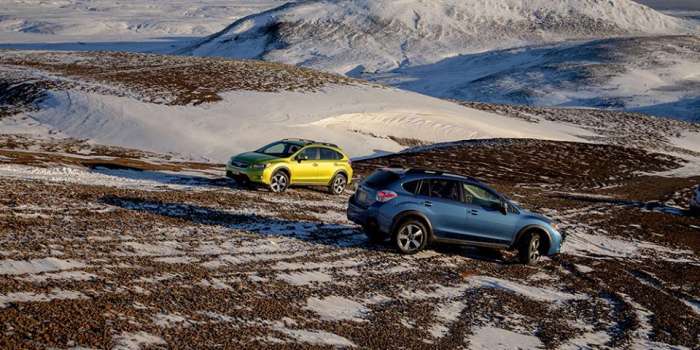 The 2014 Subaru Forester is probably the ideal mid-size SUV for the Canadians and is reaching new heights. Canadians have been snatching up the new mid-size SUV in record numbers. Subaru announced that the 2014 Forester led the way by selling 1,211 units, once again beating all other Subaru models this November with sales up an incredible 138.9 percent. And the new XV Crosstrek isn't far behind the new Forester in popularity. What is attracting so many buyers to the Subaru brand?

Forester got a complete redesign for the 2014 model year and buyers all over North America has responded to the new SUV. We don’t have the number for Canada, but In the U.S., nearly 60 percent of Subaru’s buyers are new to the brand. Many of those new buyers are millennials age 18-33 years old and are purchasing the newly remodeled Forester.

Canada’s Northern climate is ideal for Forester as it uses Subaru’s excellent all-wheel-drive system. Subaru says the put the “Sport” back into SUV and it seems to have worked for attracting new buyers to the brand. The new SUV is being purchased by younger buyers who have an active lifestyle. Canadians use their Forester to commute to work and run errands during the week, and head to the Canadian Rockies on the weekends for recreation.

And Subaru just launched their first ever hybrid model, the 2014 XV Crosstrek Hybrid this month. It comes with full hybrid technology and can propel itself at low speeds purely under electric power, which optimizes fuel economy and excels in stop-and-go city traffic. The electric motor can also provide motor assist for acceleration in parallel with the gasoline engine, and an EV mode will operate the vehicle in certain low-speed situations. Subaru says it will get a combined 31 mpg city/highway fuel mileage.

Subaru is surging past all other Japanese automakers with a year-to-date sales increase of a whopping 20.8 percent, and there’s still another month to go before the year ends. Subaru has hit on the right formula and has created a niche market in multi-use vehicles that are perfect for the Canadian market. Record sales were accomplished throughout Canada, with all regions reporting their best November ever, and each of them surpassing last year’s mark for total annual sales.

Subaru is building a strong loyal base of customers and is now appealing to new buyers who are drawn by the brands unique vehicles that are ideal for active lifestyles. Subaru has moved from a “little-known car manufacturer” to an established brand. The new 2014 Subaru Forester and XV Crosstrek models are a big reason for Subaru’s success in Canada.

Mike A wrote on December 10, 2013 - 11:21pm Permalink
I live in Kingston, Ontario and I can tell you that even in the last year I'm seeing more and more Subaru's on the roads. It's a trend that I don't see slowing any time soon.