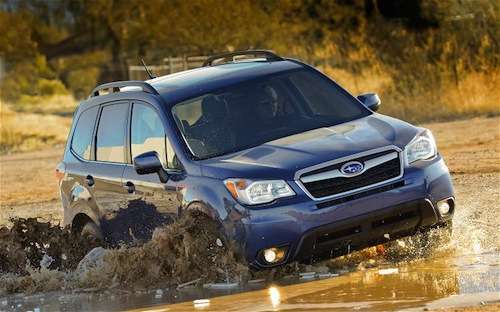 The new 2014 Subaru Forester is designed for the active lifestyle of its owners, and with X Mode, it has the durability needed to make those extreme sports happen.
Advertisement

Subaru knows their customers well, and the new 2014 Forester will be purchased by people around the globe with active lifestyles. The new 2014 Forester is a global vehicle and the X Mode that is featured on the crossover will allow owners in North America, Europe, Eurasia and Australia to go through some very extreme conditions. Most SUV owners never take their vehicle off-road, but Subaru owners are a different breed and the X Mode gives the extra assist they will need.

You won’t find Subaru owners sitting on the couch watching extreme sports. Buyers of the new 2014 Forester will use the crossover to enjoy winter sports themselves in the mountains around the globe for skiing, snowboarding and snowmobiling. They will encounter high mountain passes that are covered in snow and the X Mode will get them there safely. Owners will also use the new Forester for summer sporting activities like hiking, biking, trail running and back country fishing trips. Owners will encounter unpaved roads that are slippery and uneven and the X Mode will get them to their destination and back home safely. Subaru also piled on the refinements to the chasis for ride comfort.

With a flip of a switch X Mode is available

On unpaved and slippery roads, torque is not distributed evenly to all four wheels and one or more wheels can begin to slip and the vehicle can lose traction and get stuck in the snow or mud. X Mode is designed to be used easily and can be engaged with a flip of a switch. The X Mode will allow any driver regardless of skill level, to escape any extreme situation they may encounter. Many families who buy the 2014 Forester may live in harsh climates around the globe and family members can engage the system easily. Subaru also designed the new Forester with extra details on the inside for families.

Extreme testing of X Mode on the Forester

The new 2014 Subaru Forester will be sold globally and the Japanese automaker needed a vehicle that could handle the most extreme situations on any road, anywhere. Subaru tested the new crossover mules in many different conditions where extra traction was needed. The testing took place in environments that were more extreme than the average driver will ever encounter. But Subaru knows that their owners are anything but average.

When the wheels begin to slide or slip, the X Mode switch located near the gear shift, allows the driver to keep his foot off the brake and let the system do the work. This allows the driver to keep their attention on the road. Subaru put the new system through extensive tests in order to make sure it would work in any conditions. The created a test road with different mock-ups to simulate rough and harsh roads around the world. Several thousand kilometers were driven by Forester test mules and their drivers to test the development of the new system. The test road was so rough, that Subaru limited their drivers to only 30 minutes on the extreme road.

Subaru engineers also reproduced an endurance test course called the “road simulator” and kept the test vehicle on the machine for tens of thousands of kilometers. The suspension and body was then checked for damage, and the necessary changes were made. This test continued on for one million kilometers before the final X Mode system was put into production.

For those SUV buyers with active lifestyles, the new 2014 Subaru Forester with standard X Mode is the global vehicle that will handle any extreme conditions its owner will encounter. The Forester with high ground-covering ability of X Mode has the durability needed to make those extreme sports happen.