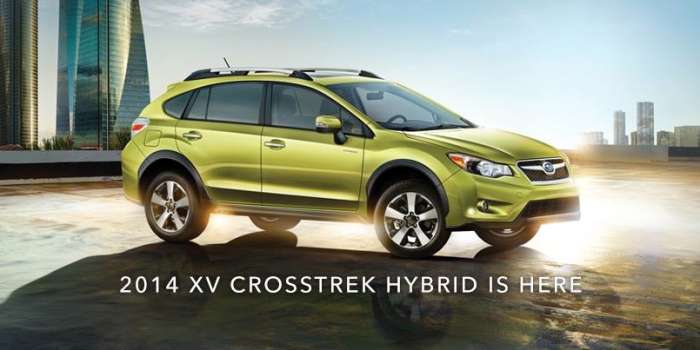 Subaru’s first hybrid vehicle, the 2014 XV Crosstrek has finally arrived and is launching in the U.S. and Canada. And it may come with Toyota’s hybrid technology in the future. The new Subaru Hybrid is the lowest emissions and most fuel-efficient full-time AWD hybrid crossover in North America. But it’s really the only full-time AWD hybrid crossover because it’s distinctive in the compact crossover class. Subaru has a unique niche market for the XV and the hybrid is the latest addition. But it may be more fuel-efficient in the future with Toyota’s hybrid technology.

This is Subaru's first-ever hybrid model and the XV comes with full hybrid technology they developed in-house. It can propel itself at low speeds purely under electric power, which optimizes fuel economy and excels in stop-and-go city traffic. The electric motor can also provide motor assist for acceleration in parallel with the gasoline engine, and an EV mode will operate the vehicle in certain low-speed situations. Subaru says it will get a combined 31 mpg city/highway fuel mileage. But that’s only 3 mpg more than the non-hybrid XV.

The XV Crosstrek Hybrid starts at $25,995. Given its $4,000 price premium, you'll certainly want to consider whether the Crosstrek Hybrid makes sense for you. For those who travel long highway distances, the standard XV ($21,995) may be the better choice. But many new Subaru buyers are younger millennials who are using their multi-use vehicle for commuting in the city during the week, and for off-road excursions on the weekends.

Of course all-wheel-drive is standard on the XV Crosstrek Hybrid and it comes with a choice of a five-speed manual or continuously variable automatic transmission (CVT). The XV has a higher 8.7 inches of ground clearance and features extra body cladding for protection against scratches while driving on trails.

The compact hybrid system weighs just 209 lbs. and places the electric motor just behind the transmission and in front of continuously variable transfer clutch. With the addition of all the new features, the new hybrid weighs approximately 300 lbs. more than the gas variant XV Crosstrek.

As Subaru brings out more new hybrids, they will need to increase fuel mileage in future hybrids to stay competitive. But if they do borrow the Prius technology, they will need to modify it to make it work with their all-wheel-drive Symmetrical layout. "We are now considering how we can adapt Toyota's system into Subaru vehicles in the future," Muto said.

We do know Subaru will stay true to their core vales and their niche market of multi-use vehicles. We could see the 2014 Subaru XV Crosstrek and others with Toyota’s fuel-efficient technology in the near future.