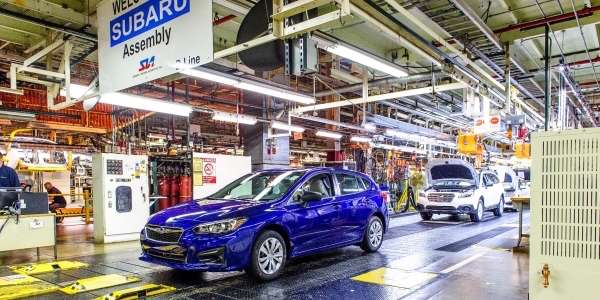 First American-Made Subaru Impreza Rolls Off Assembly Line; What it Means for Consumers

It was a big day for Subaru as the first American-made Impreza rolled off the assembly line yesterday. What will it mean for consumers?
Advertisement

It’s been three years in the making, and the first American-built 2017 Subaru Impreza rolled off the assembly line yesterday, November 1, 2016. It’s the first Impreza produced at Subaru of Indiana Automotive (SIA) in Lafayette, Indiana. Subaru only produced the Outback and Legacy before the new compact arrived. Impreza was previously only made in Japan.

SIA held a line-off party with President Toshiaki Tamegai and SIA associates in attendance as the Lapis Blue Metallic 5-door hatch rolled off the line. It was an important day as Subaru invested more than $400 million to upgrade the plant to build the new global Impreza compact sedan and 5-door hatch.

Fuji Heavy Industries (FHI) parent company of Subaru invested around $1.3 billion, over the last 4 years for plant expansion as the Japanese automaker needed the room to build more vehicles. Subaru has seen eight consecutive years of increased sales in the U.S. and demand is high for their multi-purposed vehicles.

What does the new Impreza mean for consumers?

The first representation of Subaru’s all-new Global Platform arrives for the first time in the form of the all-new 2017 Impreza. The Impreza sedan and hatchback will be roomer, and the seating position and steering wheel adjustments will allow room for taller drivers to be more comfortable. The car will feel bigger, have a more premium attitude, and will attract a larger audience.

The body and chassis rigidity are increased significantly and consumers across the globe should feel a big difference. According to Subaru, body vibrations have been reduced by 50 percent, Consumers should feel improved response to inputs in steering and driving dynamics, and body roll will be improved in the corners.

The new Impreza represents a new global era for the Japanese automaker. It’s the most important new model since Subaru introduced the Crosstrek crossover. The new 2017 Subaru Impreza will also usher in Subaru’s all-new 3-Row, 7-seat Crossover which will also be built at the Lafayette plant starting in 2018. The new SUV, which could be called “Ascent 7”, will also be built on the new Global Platform.