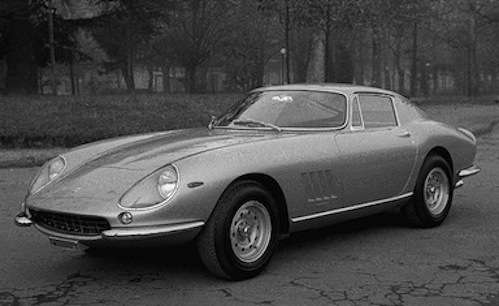 Ferrari Classiche announced that they have taken delivery of one of the most famous cars ever to have left their factory in Maranello. The Ferrari 275 GTB4 that was owned by Steve McQueen when he was filming the movie Bullitt, has found its way back home. The new owner contacted Ferrari’s Classiche department to have the iconic car restored back to its original specifications.

McQueen originally took delivery of the new Ferrari 275 GTB4 while he was in San Francisco filming Bullitt. After the legendary American film star sold the car, the new owner, sometime in the 1980’s, tried to make a Spyder out of it by chopping the top off. And since there were only 10 real 275 GTB/4 NART Spyders ever produced, he wanted to make his into one.

The car was sold to a new owner who has just recently contacted Ferrari’s Classiche Department to have its roof rebuilt and the car returned to original factory specifications. Ferrari Classiche was established in 2006 specifically to provide restoration and maintenance services, technical assistance and Certificates of Authenticity to owners of classic Ferraris. The restoration facilities are housed in the former Ferrari foundry within the Maranello factory.

With the recent record sale of the 1962 Ferrari 250 GTO for $35 million, Ferrari’s continue to be an excellent investment for those who can afford one of the classics. And McQueen’s cars continue to bring big bucks at auction and are sought after by collectors.

McQueen's personal 1970 Porsche 911S driven in the opening scene of Le Mans, sold for $1,375,000. His metallic brown 1963 Ferrari 250 GT Lusso sold at Christies a few years back for $2.3 million. And now the new owner of McQueen’s Ferrari 275 GTB4 knows the value of his recent investment will skyrocket after Ferrari restores the car to its original specs.

Ferrari admits that they have had a direct impact on the huge interest in classic Ferraris in recent years and comes from their direct involvement. The Ferrari Classiche Department not only restores the cars to their original factory specifications, but they also will provide certificates of authenticity which testify to the originality of a car. Since their inception in 2006, Ferrari Classiche has processed over 3,300 certification requests using the company's exhaustive archive records and original designs.

Under the provisions of the certification process, a Ferrari can only be authenticated if it is returned to the exact specifications as when it left the factory. The new owner of McQueen’s 275 GTB4 wisely decided to return the car to its original coupe form and Ferrari Classiche has started the restoration process by reproducing the roof and buttresses with hand-beaten steel panels. Ferrari didn’t release what the restoration process will cost the new owner, but we know that when they finish, McQueen’s Ferrari 275 GTB4 will be worth millions.