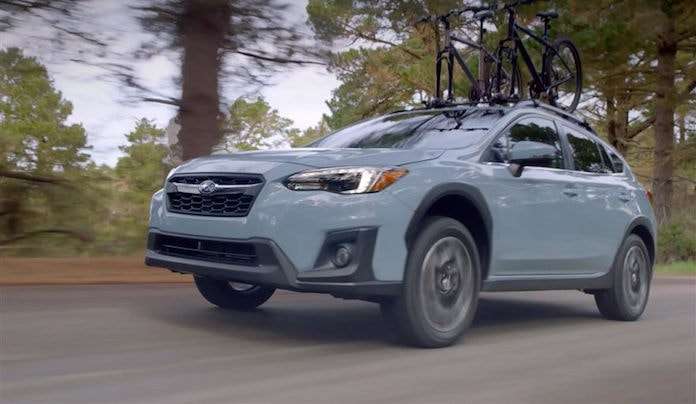 Everything You Need To Know About New Subaru Crosstrek EyeSight

The 2018 Subaru Crosstrek is getting global safety awards already. What does EyeSight have to do with it?
Advertisement

The new 2018 Subaru Crosstrek gets top safety awards in Europe, Japan and the U.S. and it’s rated tops when it comes to protecting its occupants in the event of an accident. It’s because of the new Subaru Global Platform designed to deliver higher levels of safety performance. It’s working, but what about the Subaru EyeSight driver assist technology?

We’ll break it down into the four key functions designed, engineered, and tested to enhance overall safety, and to prevent accidents from occurring. We tested all these systems at the new 2018 Subaru Crosstrek launch event in Denver, and can report, they do work.

When the Crosstrek equipped with EyeSight detects the possibility of a frontal accident occurring, the system will warn the driver. This can happen in everyday driving situations like when the vehicle ahead suddenly slows down or even when a pedestrian crosses the street without looking. If EyeSight does not detect any driver reaction (stepping on the brake), the system will automatically apply the brakes to lessen the impact, or it will apply full braking power to avoid an impact completely. Unsecured items in the vehicle can go flying, so it’s best not to have that open cup of hot coffee sitting out.

We witnessed a scary event late last year, where a driver parked in front of a hospital in Denver, was distracted and put the gearshift in drive instead of park. His foot slipped off the brake and pushed the gas and went flying forward over the parking block and into a tree. The car went up the tree and turned over just in front an outside cafeteria where people were sitting. It could have been much worse.

EyeSight would have prevented this by automatically limiting the throttle to prevent the older driver from going over the parking blocks. The limiter lasts four seconds, long enough for the driver to recognize the error and get off the gas. We tested the system many times, and it works.

This EyeSight function gives the driver a warning if it detects, through driver inattentiveness, the car drifts from the lane without activating the turn signal. The warnings are comprised of beeps and warning lights, flashing on the screen in the gauge cluster for the driver to see. This feature is seen on other vehicles from other makes, though EyeSight's version does not give an annoying tug at the steering wheel like other manufactures we’ve driven.

The EyeSight cruise control system is very convenient for highway driving where you don’t want to keep changing your speed. You just set the speed and even the distance you want to maintain and go. It offers several more layers of convenience, by maintaining a speed the driver selects, but will slow the Crosstrek down as it will prioritize a safe distance to the car ahead.

Another layer of convenience in Subaru’s version of ACC allows the vehicle to come to a full stop if the car ahead does, and will resume to the set speed and distance again once traffic moves. The application of this technology is especially useful when driving in slow, stop-and-go urban traffic. The feature even advises the driver if the car in front has started moving again, and hopefully, you won’t be getting that annoying horn from the impatient driver behind. We saw Subaru engineers testing the system at altitude in Colorado driving the all-new 2019 Ascent 3-Row coming this summer.

Other automakers have safety systems, Honda has Sensing technology while Nissan has ProPilot, just to name a few. What sets Subaru's EyeSight apart is in the Japanese automaker’s approach to achieving the capability. EyeSight acts like a second set of “eyes” using two cameras that flank the rearview mirrors, giving the system its vision ahead detecting any potential dangers. This location also keeps the camera eyes free from debris like ice and snow.

Think of it like having a driving instructor along with you, not being intrusive, but there for you if your attention is taken away from the road or if you are distracted while driving. The system will not hesitate to step in if it's really necessary to prevent a crash or, at the very least, reduce the actual impact. Every Subaru vehicle with an automatic transmission can be equipped with EyeSight. 2018 Outback, Forester, Crosstrek, Impreza, WRX, and Legacy and all-new 2019 Ascent.

David wrote on January 30, 2018 - 4:19pm Permalink
Since this is how all versions of EyeSight have worked, how is the new Crosstrek's EyeSight different?
Ed B wrote on January 31, 2018 - 9:18am Permalink
The system is very good and highly recommended (worth the price). The great news is the new Ascent will have Eye-Sight standard across all trim levels. Hopefully,Subaru does that across the entire line up. Similar systems in luxury cars are ridiculously higher in price and are add-on(s) to what is already a lofty price tag. Wise move by Subaru to focus on safety and make it affordable.
David wrote on January 31, 2018 - 10:21am Permalink
Right... but the article makes it sound like this version of eyesight is different or better... but no explanation why...?
Ed B wrote on January 31, 2018 - 12:30pm Permalink
Agreed, they do update the versions but the core accident derrants remain the same.
Harry H wrote on May 6, 2018 - 10:36pm Permalink
In my experience, Lane Keep Assist DOES tug the steering wheel to keep the car in lane.

Tesla Contemplates A New Strategy for China Retail even As Sales Boom
Jay Leno on Elon Musk & EVs: “I Think He Should Get ... Credit"
END_OF_DOCUMENT_TOKEN_TO_BE_REPLACED