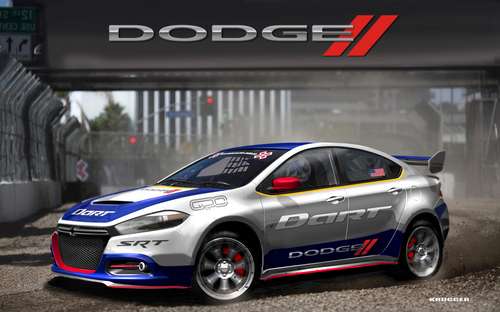 Travis Pastrana, a four-time Rally America champion is an accomplished driver and brings multiple supercross and motorcross championships as he teams up with Dodge to compete in the 2012 Global RallyCross Championship Series starting in May.
Advertisement

Pastrana is one of the most popular motorsport athletes on the planet and has more than 3.5 million Facebook followers. He owns a number of successful enterprises including Nitro Circus, which includes a television show, live tours and a 3D feature film project. Now he is adding one more challenge to his resume.

“When I first heard about GRC, I was really interested, and after watching some of the rounds last year and then actually competing at X Games I was hooked!” said Pastrana. “Now to be able to partner with Dodge to field my own program this year is a dream come true. The new Dodge Dart offers the perfect platform for rally cross, and I look forward to putting it on the podium all season long!”

Global RallyCross is a spin-off of the popular X Games rally races. It is especially popular with today's youth because of the skill and excitement that it offers. The 600 horsepower rally cars compete in a closed-course rally track that incorporates 70-foot jumps over other cars, creating a “motocross with cars” action.

According to the Chrysler press release, the 2013 Dodge Dart is custom built specifically for Global RallyCross racing and will only share a few things with a factory model. Pastrana’s Dart will be powered by a race-ready 2.0-liter, 4-cylinder, 16-valve turbo-charged engine coupled to a Sedav 4-wheel drive gear box that puts out 600-horsepower and more than 550 lb.-ft. of torque. Too bad they don’t make a production model with those numbers.

David Bailey, Senior Engineering Manager for SRT Motorsports, says “The sport is extremely exciting and the on-track action can be brutal on the drivers and the cars,” said Bailey. “The cars are jumping higher than ever and landing safely. The Dart rally car is lightweight with a very powerful motor. The zero to 60 mile-per-hour times are incredible, as low as 1.9 seconds, so with Travis behind the wheel, we can’t wait for the season opener.”

With Pastrana behind the wheel, the Dodge Dart should be immediately competitive and give the all-new Dart some positive advertising among the younger generation Chrysler is trying to reach.

The series begins in May and concludes in Las Vegas. Also included are races at X Games scheduled for June 30-July 1 in Los Angeles. ESPN will broadcast live coverage of the entire 2012 race series.