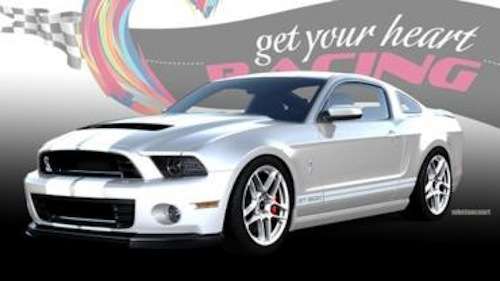 We reported last week that there would be two very special 2013 Ford Shelby GT500s that would go across the auction block at the 2013 Barrett-Jackson auction. Those two highly-collectible cars have been sold and have brought big money as they were auctioned for charity this weekend. The two cars were the 2013 Shelby GT500 one-off car that was created to show appreciation for saving a mans life. The second one-of-a-kind Shelby GT500 Cobra was built to honor the late Carroll Hall Shelby.

On Friday, January 18, the first unique 2013 Shelby GT500 was auctioned with a final selling price of $150,000. The very special car is a one-off car originally built to show appreciation for saving a mans life. The special-edition supercar was originally auctioned off on Sept. 22, and the proceeds went to benefit the Henry Ford Health System. Ford designer Melvin Betancourt, designed the special car to thank the dedicated team at Henry Ford Health System for saving his life.

All proceeds will go to benefit the Edith and Benson Ford Heart & Vascular Institute. The one-off 2013 Shelby GT500 created by Betancourt keeps the original factory equipped powertrain and adds a unique appearance. For Henry Ford Health System, he created a car with a unique white exterior paint and contrasting white graphics. It transfers all the power to the ground via twenty-inch white wheels that add to a look that “is nothing short of breathtaking.” Inside, it gets custom white Recaro seats and black stitching.

The second one-off Shelby GT500 Cobra went across the auction blocks yesterday and sold for $200,000. Proceeds from the sale will be donated to the Juvenile Diabetes Research Foundation. The very special one-off 2013 Shelby GT500 Cobra was built to pay tribute to the late Carroll Shelby by “Friends of Carroll.” The “super Cobra” was first revealed this summer at the Monterey Motorsports Reunion. The car is built 50 years after the very first Shelby Cobra was designed and built by the “father of the Cobra” Carroll Hall Shelby.

The unique car features the most powerful V8 in North America, and comes with the 5.8-liter supercharged powerplant from the production 2013 Shelby GT500. But this special Cobra comes with a 4.0L Whipple/Ford Racing supercharger and is tuned to increase the horsepower to 850. It also gets a set of 20 inch rear wheels that are13 inches wide. The body has been modified to handle the extra wide tires and comes with a number of other unique exterior features like a special hood scoop, Shelby and Ford Racing badges and a paint scheme that was found on vintage Shelby race cars.

Both cars are now in the auction books and have been sold with total proceeds of $350,000 going to benefit two very good charities. The 2013 Shelby GT500 created by Betancourt will benefit the Edith and Benson Ford Heart & Vascular Institute and the 2013 Shelby GT500 Carroll Shelby tribute Cobra will benefit the Juvenile Diabetes Research Foundation. And the two owners will get to enjoy the two one-off supercars for a long time.