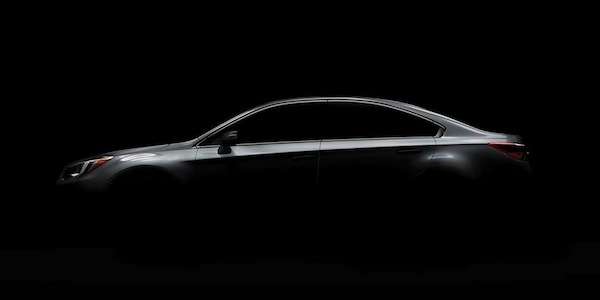 The all-new 2015 Subaru Legacy flagship model will make its world debut at the 2014 Chicago Auto Show on February 6.
Advertisement

Subaru is getting the most mileage they can from the U.S. auto shows as they introduce their new 2015 models. LA saw the new 2015 Subaru WRX and Subaru unveiled the all-new 2015 WRX STI in Detroit. Chicago will see the global debut of their all-new 2015 Legacy flagship sedan. And why wouldn’t they introduce their new cars in the U.S., it’s their biggest global market.

The all-new 2015 Legacy, Subaru's flagship model will celebrate its 25th anniversary this year, and will make its world debut at the 2014 Chicago Auto Show on February 6. We saw the Legacy Concept at the Los Angeles Auto Show 2013 revealed alongside the new 2015 WRX. Legacy Concept gave us a good idea of the new coupe styling that will be featured on the 2015 Legacy.

The new Legacy Concept stole the show away from the new WRX as the reviews were much more positive for the Legacy Concept than the new WRX styling. Most fans felt the Japanese automaker didn’t change the WRX enough. Subaru has revealed a teaser image above of the new 2015 Legacy and it looks even better than the Concept.

This is the 25th anniversary of the Legacy sedan and it looks like Subaru is planning quite a celebration. We can likely expect to see a 2015 Subaru Legacy 25th Anniversary Launch Edition that will launch later this year in Japan and then in the U.S. It will likely feature the “Ocean Silver Metallic” exterior paint that we saw on the Legacy Concept with special silver accents on the interior. The Subaru flagship sedan has always been a steady seller for the brand and was fifth in the Subaru lineup in sales in 2013.

The Subaru Legacy sedan was born in 1989, and has served as the flagship for the brand for twenty five years. It’s been praised for its safety, dependability and driving performance around the globe. In Australia, it’s called the Liberty because of the Legacy charity organization in the country down under. Around the world it has delivered the combination of Subaru Boxer engine and Symmetrical AWD (S-AWD), Subaru's unique core technology for 25 years.

The new coupe-like styling of the 2015 Legacy could help propel the flagship model to compete better with the top sports sedans. Moving into its six-generation, the 25th anniversary of the Legacy may see the flagship make the next step in its evolution. This model shows the design direction of next generation Legacy mid-size sedan models and where Subaru is headed.

Legacy is growing up and the all-new 25th Anniversary 2015 Subaru Legacy will make its world debut at the 2014 Chicago Auto Show (Press day: February 6 and 7; Open to the public from February 8 through 17, 2014). The new Legacy will be unveiled at the press briefing scheduled for 10:30 AM CST on February 6 at the Subaru booth. Stay tuned to Torque News for the latest 2015 Legacy news.