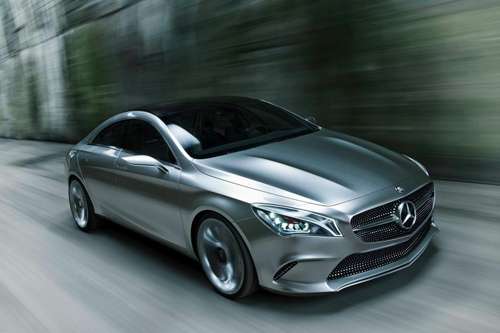 Concept Style Coupe is the future for Mercedes-Benz

Mercedes-Benz will display the Concept Style Coupe at Pebble Beach for auto enthusiasts to see what the future holds for the German automaker.
Advertisement

Auto enthusiasts who want to see the past, present and what the future holds for Mercedes-Benz, will be able to see it this week at Pebble Beach. Along with some vintage and current new models, Mercedes is going to display the Concept Style Coupe for those auto enthusiasts to imagine what the future holds for Mercedes-Benz. And they won’t have to leave anything to their imagination, because Mercedes will display the four-door coupe live “that is expressive and powerful in its design.”

When Mercedes opened their new plant in Hungary where they are building the new B-Class, they announced that a new four-door coupe would be the future for the German automaker. The Concept Style Coupe that will be on display in Pebble Beach will likely be very similar to the production model that will be available in North America. The new rakish CSC four-door coupe is expected to compete with the Audi A3 and the Volvo’s new V40.

The future for Mercedes-Benz

It will built alongside the B-Class and will share the same Mercedes MFA platform. Mercedes announced the new four-door coupe will be powered by a turbocharged 2.0-liter four cylinder engine that will be direct-injected producing 211 horsepower. It will come mated to a seven-speed dual-clutch transmission and 4Matic all-wheel drive will transfer power to the road. Mercedes claims the car will provide “sporty performance and exemplary efficiency."

The press release from Mercedes yesterday also said the new Concept Style Coupe features headlamps with innovative indicators. They call the new sporty car a “rebel with its sporty breathtaking proportions and aggressive stance.” Throughout Pebble Beach weekend, the Concept Style Coupe will be on display at the Mercedes-Benz Star Lounge.

Mercedes is also bringing three 1952 W194 vehicles and six variations of the classic SL from the 1950’s that will be on display at the Mercedes-Benz Star Lounge located on third fairway at the Lodge at Pebble Beach. Mercedes will include both new and vintage SL Roadsters to lead the Pebble Beach Tour d’Elegance presented by Rolex on August 16, 2012.

The future is certainly bright for Mercedes-Benz and they plan on showing exactly what it looks like as they display the Concept Style Coupe at Pebble Beach this week.

Panasonic Updates Profit Forecast, Noting How Much Tesla Batteries Help The Jump
2022 Porsche 911 GT3 Laps Nurburgring in 7:04 With Journalist Behind The Wheel
END_OF_DOCUMENT_TOKEN_TO_BE_REPLACED