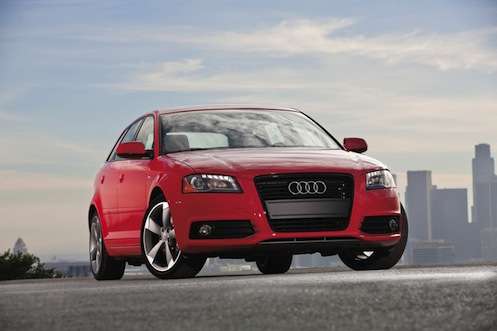 Audi has announced they are counting on the all-new A3 to give an extra bump in sales when it launches in select markets soon.
Advertisement

Audi has announced in a press release yesterday that the first half of 2012 has shown the German automaker double digit growth. It has carried over into July with the company selling 119,600 cars worldwide. This is a 12.9 percent increase over the previous month last year. In the U.S., Audi has experienced a healthy 28 percent increase.

Even with a very successful start to the year, Audi is counting on even greater sales numbers when the all-new Audi A3 sedan launches later this month. Audi says the new A3 will launch in the first select markets starting later this month. The new compact luxury sedan is expected to launch first in Europe and then in the U.S. later this year. We will likely see the North American debut of the new third-generation four-door sedan at the 2012 Los Angeles Auto Show.

Audi will have stiff competition

Audi is counting on the new A3 to give the competition a good run for their money. The luxury four-door sedan will compete in the marketplace against the BMW 1 Series, Volvo V40, and the all-new Mercedes-Benz A-Class that is getting plenty of attention. The A-Class is experiencing record sales and just got the most attractive German car award.

“Following this successful start to the second half, we are expecting the new A3 to give us an extra lift over the coming months,” said Rupert Stadler, Chairman of the Board of Management of AUDI AG. “Because we aim to continue pioneering the premium compact class with the new generation, too.” The new Audi A3 will appear on the first markets from the end of August.

Audi has bumped up their launch date of the A3 and is looking for the luxury compact to help keep sales up in both Europe and North America. The luxury compact segment is one of the fastest growing in the U.S. and Audi wants to capture its share of the market against strong competition from BMW and Mercedes-Benz.

The A3 should fare well in the U.S. as have other Audi models

Audi says the new generations of the A4 and A5, which went on sale in the U.S. in June, have seen exceptionally strong demand. Sales of the A4 models were up 51.7 percent, while the A5 models gained 31.9 percent. The high-performance RS 5 that went on sale last month is also going to give a boost in last quarter sales.

Look for the new Audi A3 four-door sedan to be launched before the end of the year here in the U.S.