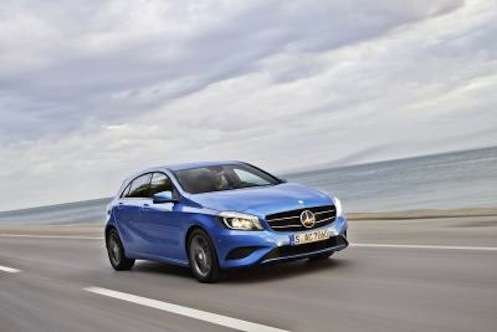 Readers of Germany’s leading car magazine AUTO BILD, have voted the all-new Mercedes-Benz A-Class the most attractive German car on the planet.
Advertisement

The paint is barely dry on the first Mercedes-Benz A-Class luxury compact car, and it is already receiving awards. Readers of the leading car magazine in Germany, AUTO BILD, have voted the A-Class Germany’s most attractive car. The automotive magazine polled 100,000 readers which voted on German cars in a number of categories. In this year's competition they were able to vote for 136 current models in five categories. The A-Class won the award in the compact car segment.

Mercedes cars have won the award the last four years with the previous winners being the E-Class, SLS AMG Coupe and the SLK. Now in 2012, Mercedes takes the top honor with the design of the new A-Class winning German readers over in the beauty contest. Mercedes-Benz also claimed first place in the SUV/Vans/All-wheel drive category. The M-Class won the distinction as the most attractive in the category. Mercedes says they now can claim that they have the most attractive automobiles on the planet.

The attractive A-Class is already a big hit with buyers

Mercedes is looking to attract a whole new breed of buyers in the luxury compact segment with the A-Class. And it looks like the German automaker has hit on the right formula. Since the start of sales in mid-June in Europe, more than 40.000 customers have already ordered the attractive A-Class before the first car was produced. "Demand for our premium compact cars is so strong that we are going to to introduce a third assembly shift in October 2012", said Peter Wesp, Head of the Mercedes-Benz Rastatt plant.

Mercedes seems to making a statement with the all-new A-Class. They are opening up a whole new chapter in the luxury compact class with its new design and high-tech features. "The A‑Class is a clear statement on the new dynamism of the Mercedes-Benz brand," says Dr Dieter Zetsche, CEO of Daimler AG and Head of Mercedes Cars.

The new A-Class is already a big hit in Europe, and should also be popular with U.S. buyers when it hits North American shores. The luxury compact segment is growing in the U.S. and Mercedes is set to capture new buyers here in North America. With an attractive price in Europe starting at $29,340, it will be interesting to see if Mercedes will be able to keep the all-new A-Class under $30,000 here. If they do, look for the new Mercedes-Benz A-Class to compete well with the BMW 1-Series and the Audi A3.