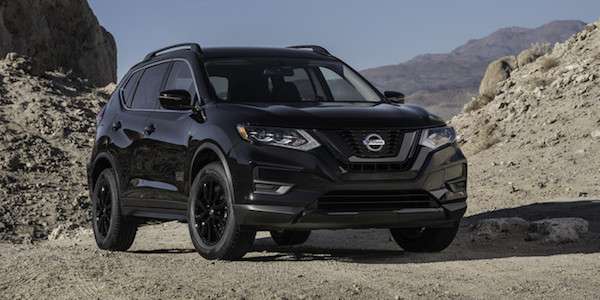 Nissan is going all-out with the Rogue One Star Wars theme. They unveiled a new Rogue One Star Wars Limited Edition model at the LA Auto Show this week. Buy the Death Trooper helmet and you get the car free. Well not really, but it makes for a good story. If you buy one, each special edition Nissan Rogue crossover comes with an exclusive numbered, full-size replica collectible Death Trooper helmet.

Nissan says there are 131 million Star Wars fans in the U.S. and they are capitalizing on the huge following. Nissan is only building 5,400 copies of the Nissan Rogue: Rogue One Star Wars Limited Edition models. 5,000 for the U.S. market and 400 for Canada. The price of the Limited Edition package will be available for $1,990, and is only available on 2017 Rogue SV equipped with the Sun and Sound Touring Package.

Inside, it gets special features that include logo carpeted floor mats, "Star Wars" logo illuminated kickplates, "Rebel Alliance" and "Galactic Empire" logos in cupholder inserts and interior accent lighting. It is offered in just two colors – Magnetic Black and Glacier White – and one interior color, charcoal.

The special models will come in two colors, white for the storm troopers, black for the new iconic death troopers which are new to the film. Of course it comes with the exclusive numbered (one of 5400), full-size replica collectible Death Trooper helmets. The 2017 Nissan Rogue One Star Wars Limited Edition models are built at the Nissan plant in Smyrna, Tennessee. The new Rogue One: A Star Wars Story comes out in theaters December 16.