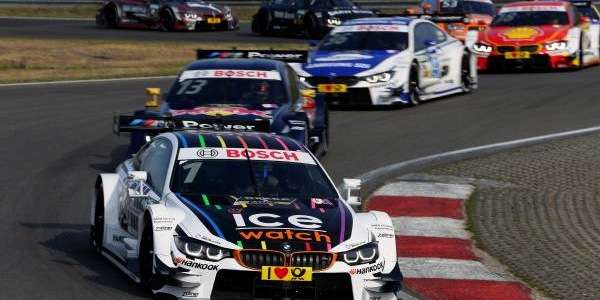 BMW Motorsport made history in the seventh race of the DTM season, claiming all of the top seven positions.
Advertisement

It has never happened before and it may not ever happen again. Race seven of the 2015 DTM season will go down in BMW Motorsport history as an extraordinary day. BMW became the first manufacturer in the history of the DTM to finish in places one to seven.

DTM Champion Marco Wittmann won race seven in his Ice-Watch BMW M4 and was followed by Antonio Felix da Costa in the Red Bull BMW M4, who claimed the first podium of his DTM career. Maxime Martin was third in the Samsung BMW M4, rounding out the 1-2-3 podium.

It was BMW’s first win this season

It’s been a long drought for BMW. Wittmann won his first race since the Nurburgring in 2014. This brought an end to a winless run lasting almost a year for both Wittmann and BMW. Seven was a lucky number as it was an incredible seventh race with seven crossing the finish line one through seven.

After the amazing race Wittmann said, “It feels awesome to be back on the top step of the podium. I am incredibly happy. That is not only a great success for me, but for the team and everyone at BMW Motorsport. I think this result will give us a massive boost for the rest of the season. We all needed exactly that kind of result after the problems we had at the start of the season.”

Following a crash involving Paul di Resta in his Mercedes on lap one, the red flag came out and the cars followed the Safety Car for five laps. Marco Wittmann took the lead immediately after the start, followed by António Felix da Costa and Maxime Martin. Augusto Farfus dropped from pole to fourth place. It was all BMW after that.

A dream result for BMW

The rest of the race was a battle between all the BMW M4 DTM cars to the finish. Jens Marquardt, BMW Motorsport Director, commented after the race, “That is obviously an absolute dream result, all the drivers did a great job today. Only Martin Tomczyk was unlucky and failed to finish due to a technical problem. We had not bargained on this kind of historic result.”

No other manufacturer has ever claimed the top seven positions in the DTM before. Before today, two top-five shut-outs were BMW’s biggest successes. It was a seven BMW M4 parade across the finish line for historic race seven of the DTM.