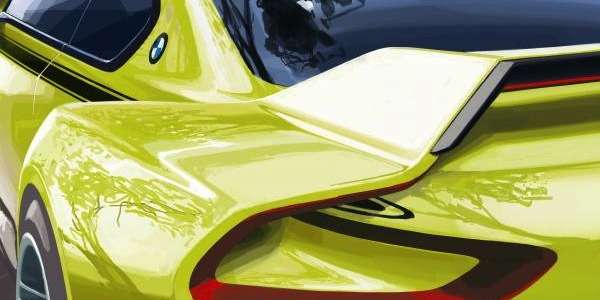 BMW teases the 3.0 CSL Hommage before it will be unveiled at the Concorso d’Eleganza Villa d’Este. What makes the BMW 3.0 CSL so important for BMW?
Advertisement

The BMW Group will bring the 3.0 CSL Hommage to the show that’s been in existence since 1929 to give a “nod” to the engineering achievement exemplified by the BMW 3.0 CSL in its lightweight design and performance. We can see from the teaser that it will draw on the character of the original model from the 70s, but as BMW says, “It has been endowed with cutting-edge materials to translate it into the present in a new and exciting guise.”

Outside, the BMW 3.0 CSL Hommage looks the part of a high performance car with its striking air deflectors, powerful wheel arches and a prominent roof and rear spoiler. BMW says, “The stretched flanks serve as an elegant counterpoint to the distinctly sporty front and rear end.” The sports car uses extensive use of carbon fiber for the lower section highlighting the car’s lightweight design concept.

On the inside, the 3.0 CSL Hommage also comes with a lightweight concept design that BMW says is not only visible but tangible as well. It also features a sports car feel along with elegance. This performance car cabin is designed for the driver. BMW says, “The Hommage displays technical supremacy and formal sophistication.”

The BMW Group designed the 3.0 CSL Hommage as a concept car just for the Concorso d’Eleganza Villa d’Este that runs May 22-24. Last year, the Maserati Alfieri won the award for Concept Cars and Prototypes. BMW hopes to win the award this year with the BMW 3.0 CSL Hommage. Stay tuned.