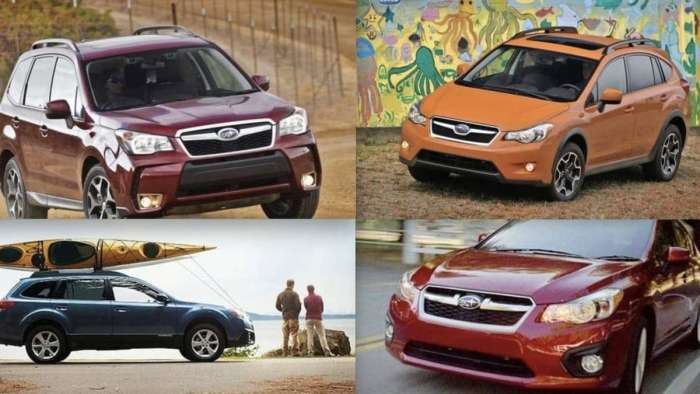 If you can’t find a new 2022 Subaru Forester, Outback, or Crosstrek, check out the best used Subaru models and years you can buy now and those to avoid.
Advertisement

When looking for a used Subaru, you should check out its long-term reliability, safety scores, and resale value to get the best vehicle. iSeeCars analyzed over 12 million cars and narrowed down the best used models across all vehicle types. 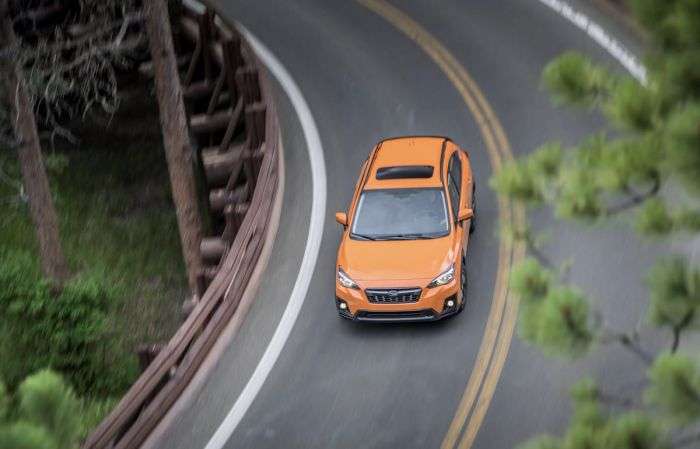 The top models include the longest-lasting cars, hold their value the best, and have the highest average safety ratings from the National Highway Transit Safety Administration (NHTSA) and the Insurance Institute for Highway Safety (IIHS).

2019 Subaru Crosstrek is among the best three-year-old subcompact SUVs.

The Crosstrek offers standard all-wheel drive, rare for the small SUV class. It has perfect safety scores and includes many driver assistance features. 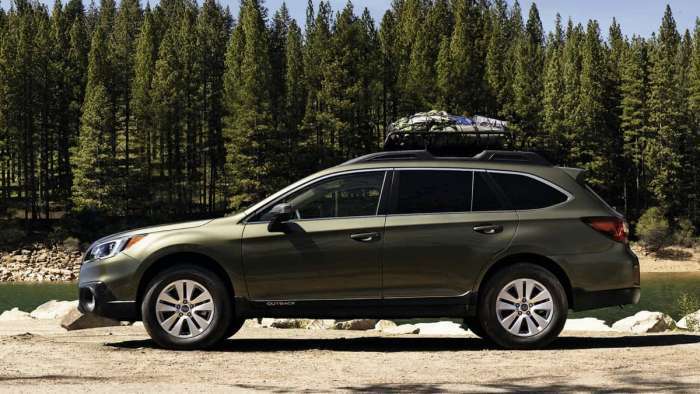 iSeeCars says, “The Subaru Outback has proven to be a long-lasting and safe vehicle with high-value retention. It is praised for its car-like driving dynamics, standard all-wheel drive, and class-leading cargo space. The Outback also earns the Top Safety Pick+ designation from IIHS.”

The Subaru Impreza wagon offers more cargo room than most subcompact SUVs and has an above-average fuel economy. The compact wagon also has standard all-wheel drive, rare for the small car class.

The Subaru Crosstrek plug-in hybrid offers a comfortable ride and has ample cargo room. The Crosstrek Hybrid can drive up to 17 miles on battery power before switching to its hybrid mode. 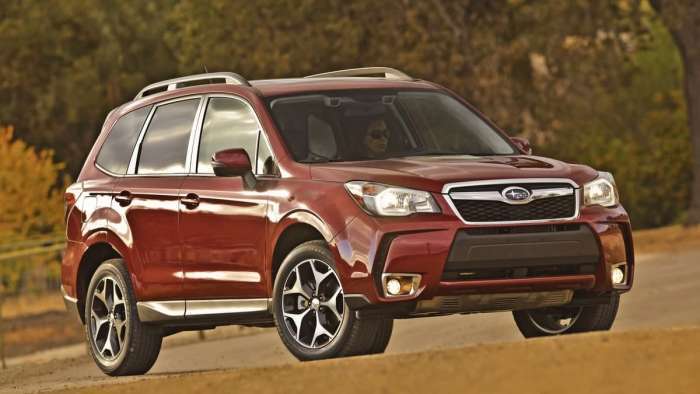 Autotrader recently named the 10 Best Used Cars of 2021 that are great alternatives to buying a new car. They say the 2016-2020 Subaru Outback is one model SUV shoppers should have on their list.

Are there used Subaru models I should avoid buying?

According to a Consumer Report study, you should avoid some older Subaru models. CR says you should avoid buying a 2013 Subaru Crosstrek and the 2013 Impreza compact sedan and hatchback models.

The 2013 Crosstrek gets below-average reliability for some engine and drivetrain issues. In the Consumer Reports annual auto survey, owners report engine and transmission problems with the 2013 Impreza. The NHTSA issued two recalls for the 2013 model year for engine stalling and CVT models with a remote engine start system.

The third Subaru model on CR’s cars to avoid buying list is the three-year-old 2019 Subaru Ascent 3-Row family hauler. The Ascent was an all-new model in 2019 and had five recalls. We have covered the Ascent problems, and the big issue with the Ascent is its automatic transmission. 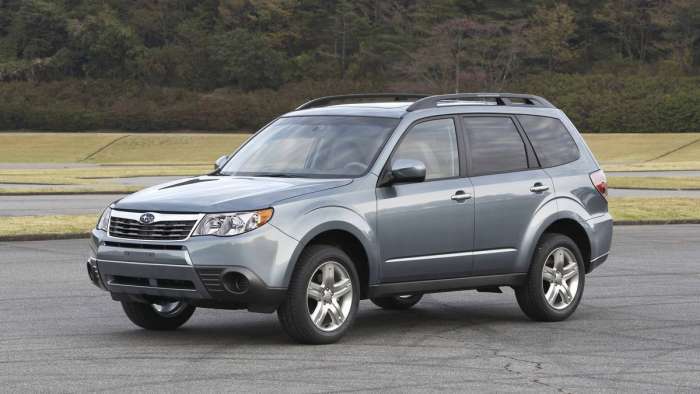 CR identified four popular Subaru models with the potential to need an expensive engine rebuild. CR says the 2001-2009 Subaru Forester, 2001-2009 Subaru Outback, 2006-2008 Subaru Impreza, and the 2006 Subaru Baja are more likely to need the head gaskets replaced than other models. If you buy one of these models and years, check to see if the head gaskets have been replaced.

Ken Okin wrote on January 22, 2022 - 8:35am Permalink
Excellent, useful and thorough report Thank you
Karen Dean wrote on January 22, 2022 - 11:10am Permalink
I have a 2016 Subaru Crosstrek with over 100,000 miles. Never any problems with anything. I feel safer driving this car than I did in my F150 truck.
David McGrann wrote on January 24, 2022 - 4:37pm Permalink
Our 2016 Crosstrek has about 13,000 miles. Good to hear. We’ve had excellent experiences with Subarus, even to the point of testing crash safety.
Nathan Kirschbaum wrote on January 22, 2022 - 11:25pm Permalink
I’ve ordered a brand new Subaru Crosstrek. Did my homework and heard nothing but good reviews from family members who have 2 of them and love them.
Joshua Yeske wrote on January 23, 2022 - 10:05am Permalink
Owner of a 2011 Subaru Outback. I have 207,000 miles on it. The only service that I would consider "outside the norm" was having to replace the catalytic converters. I've done the struts myself (full assembly), regular synthetic oil changes, and all other scheduled maintenance (plugs, timing belt, serpentine belt, etc). Aside from a small oil leak (easy repair by dealership, under $100) and the cats I've never had a major issue. I've felt safe in some of the worst weather you can drive in even with my wife and two year old with me. I'm a Subaru owner for life; but I'm hitting at least 300k with this one.
George Wood wrote on January 23, 2022 - 11:32pm Permalink
2013 Subaru Outback 2.4 L engine (and other Subarus with that same engine) drank oil like crazy. Class action lawsuit worthy. Do your research.
George Wood wrote on January 24, 2022 - 12:34am Permalink
Sorry, 2.5 Liter engines.
Matthew Kurland wrote on January 27, 2022 - 10:54am Permalink
I have a 2014 outback an I have the exact same problem. Every oil change I am atleast 1.5 quarts short on oil. The dealership has done 2 oil consumption tests on my car and they said there was nothing wrong.
Al wrote on February 3, 2022 - 3:00pm Permalink
I had a similar oil lose problem with my 2014 Outback. I made enough noise that I had the engine block replaced by Subaru. Very happy with our 2018 Outback
Brooklyn wrote on January 25, 2022 - 3:41pm Permalink
Unfortunately this is the first and last Subie we will own. We’ve had issue after issue with our 2016 Subaru Outback 3.6. Major recall in 2016 for drive shaft or something similar, radio screen had to be replaced after going black, sunroof leaks, road noise is off the chart, CvT transmission acts like a 15 year old kid learning to drive a stick, technology in the car like nav, bluetooth, voice activation is terrible. I guess we just got unlucky… but we won’t risk it again. Never again.
Nancy Bernard wrote on February 1, 2022 - 1:40pm Permalink
I have 40,000 miles on my 2017 Subaru Forrester. Just replaced the control arm bushings for the SECOND time. I’ve had so many problems with it I had to get a lawyer. Besides the big problems, can’t use their hands free the noise in the background is off the charts. I can hear but the person on the other end I can’t hear for hands-free phone. Also I’ve been to three Subaru dealers In my area and they’re all very dishonest and have quite the chip on their shoulder even though I’m a respectful lady. Remember there’s not a lot of dealers so if you don’t like the dealer in your area you’re going to drive a long way every time you need your car serviced. Subaru was a good company till about 2005. They used to be a good simple workhorse of a car but now with technology they’ve failed to grasp it like a Toyota and Honda and even Jeep has. I was always a Jeep person and switched to Subaru and NEVER, NEVER, NEVER again. I’ve had cars for 45 years. I did have one jeep grand Cherokee with some problems and the dealer treated me so much better than Subaru has treated me. Shame shame shame on Subaru of America.
David Feldman wrote on January 26, 2022 - 6:20pm Permalink
2012 Subaru Outback 3.6l 144,000 miles. I love my Subie! I’ve maintained it properly and it’s been a great vehicle. I’d buy another one.
MARINE wrote on January 29, 2022 - 2:22pm Permalink
Have 20 and 21 Foresters. All the safety features. IIHS and NHSTA highest ratings.
Carlos Barrientos wrote on January 29, 2022 - 3:27pm Permalink
No mention of the Legacy? Even the Baja and Ascent get some lines on what to avoid. This article is useless.