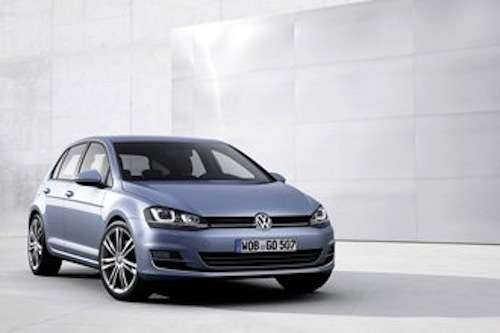 The all-new 2014 Volkswagen Golf has broken cover in Berlin and is lighter and more fuel efficient than the previous generation model.
Advertisement

Thousands of invited guests experienced the world premiere of the new Golf in Berlin today, and saw the seventh generation of the popular car that is lighter and more fuel efficient than the previous model. The new Golf was unveiled at the New National Gallery in Berlin Germany ahead of the upcoming Paris Auto Show. VW says the new-generation Golf has been completely redone with regards to vehicle weight, emissions, comfort and safety.

The first Golf rolled off the assembly line in 1974 and has been a world best-seller with the previous six generations having sales totaling 29.13 million cars. “It has also made a tremendous economic impact, safeguarding jobs, and has served as an influential measure of technical progress over the epochs,” says Prof. Dr. Martin Winterkorn, Chairman of the Board of Management of Volkswagen AG.

Volkswagen is counting on the remodeled seventh-generation Golf to continue in that success. Although, the new Golf didn’t get radical new exterior styling, the new VW Golf is now 220 pounds lighter than the outgoing model and Volkswagen says it is 23 percent more fuel-efficient. The new 138 horsepower gas engine features a cylinder deactivation and gets fuel consumption of 49 mpg.

Nothing went untouched on the new compact car. The new car is lower and longer, and the powertrain and interior gets a complete makeover for the new generation. Volkswagen also put in a new infotainment system with a five-inch touch screen and vehicle assistance systems in the new Golf. The 2014 Golf also gets Volkswagens new modular platform that creates more interior volume and is where it received its weight loss.

Volkswagen has developed two new engines for the Golf that offer a power range from 85 horsepower to 150 hp. They come with the latest stop/start technology and battery regeneration. Both contribute to the healthy increase in fuel mileage. It will also come with the TDI clean diesel that produces 105 horsepower and gets 62 mpg highway.

Volkswagen has not released pricing as yet or when the new Golf will be available here in the U.S. It looks like the seventh-generation 2014 Volkswagen Golf is much improved over the outgoing model.