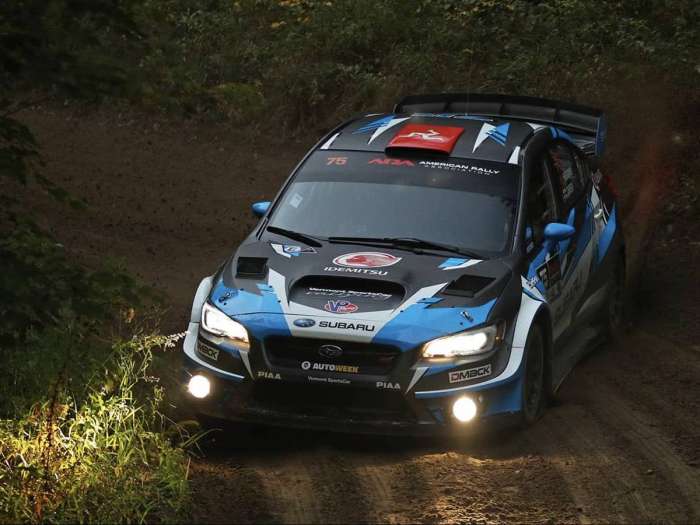 David Higgins and co-driver Craig Drew score their fourth event win of the season in the #75 2018 Subaru WRX STI. See what happened to Pastrana.
Advertisement

David Higgins and Crag Drew are not slowing up in the American Rally Association (ARA) Championship and score another win in the #75 Subaru WRX STI at Ojibwe Forests Rally in Minnesota this weekend. They led from the start and never looked back. Subaru Motorsports says the #75 WRX STI put down a commanding pace all day; winning all but the first stage on day one.

Travis Pastrana and Robbie Durant piloting the #199 Subaru WRX STI, were also running strong until they made contact with a barrier on stage one and were forced to retire. Subaru techs were able to get the Subaru WRX STI ready for day two, but they had no chance of winning.

Pastrana didn’t give up in spite of having a rough start on day one. “Drove our butts off and didn’t make a lot of mistakes. All the roads were really technical. We had a few pucker moments; the kind that makes you think: ‘this is why we drive cars,” Pastrana commented after finishing strong on day two.

Higgins and Drew started Saturday in first position overall with a one-minute lead, and with Pastrana and Durant unable to challenge for the podium due to the previous day's DNF, the duo focused on driving conservatively in order to bring home the win.

Higgins and Drew are on pace to win first ARA title

Craig Drew explained the team’s strategy: “The goal was to not get drawn into any battles we didn’t need to and just have a really good clean day. We set some good times and this goes a long way to push us toward another championship. A very good drive by David, the car’s been fantastic all weekend and a massive thanks to everybody at Vermont SportsCar. Hopefully, we can wrap up the championship in Idaho.“

David Higgins and Craig Drew will look to secure their first American Rally Association (ARA) Championship title in the #75 Subaru WRX STI next month when they head to the Idaho Rally near Boise. The event will take place on September 15-16. Stay tuned.