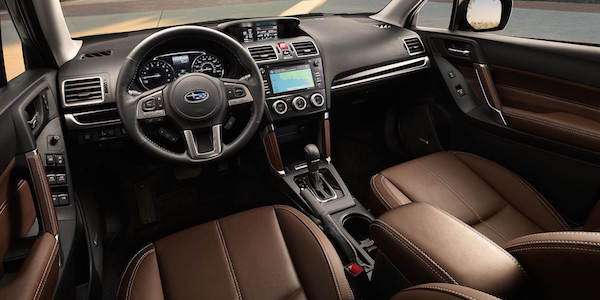 Subaru is celebrating the 50 year anniversary of the boxer engine. Subaru brings a special edition brown leather interior to the 2017 Forester.
Advertisement

Why is Subaru offering a special edition 2017 Forester with brown interior? Fifty years ago, Fuji Heavy Industries (FHI) built the first boxer engine and put it under the hood of the Subaru 1000 compact car. Today, Subaru launches a 50th anniversary 2017 Subaru Forester to commemorate the milestone. It’s been a productive workhorse for the brand and its total production over the past 50 years now tops 16 million units. The best-selling Forester gets the nod to commemorate the achievement.

What does the Special Edition Forester get?

All 2017 Forester models now feature an updated steering wheel with intuitive audio, Bluetooth and cruise control switches. They also feature Keyless Access with Push-Button Start. Other amenities on this Forester include two-position memory seats, auto up/down on both driver and front passenger windows, and automatic climate control which are now standard across other Forester trims.

Newly added soundproofing to Forester will make it quieter than the outgoing model. It gets thicker door glass and restructured door seals that will reduce wind noise. Added insulation underneath and an acoustic windshield will contribute to the 2017 Forester’s quieter, more refined interior.

Go to Page 2: What about the exterior?