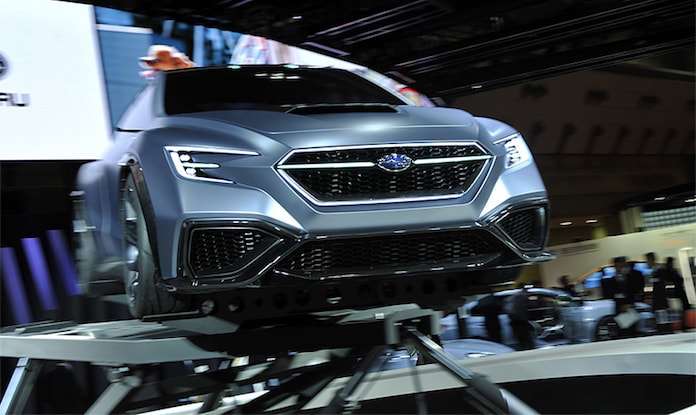 The Subaru WRX STI is due for a complete overhaul and it’s coming in 2020. What upgrades will make it a bigger success?
Advertisement

Fans aren’t interested in a new 2020 Subaru WRX STI with an outdated engine like the aging EJ25 2.5-liter powerplant. While the internals have been upgraded, the STI’s EJ25 has just 5 more horsepower than the model that was first introduced in the U.S. in 2004. Subaru will update the boxer engine, we just don’t know what will be under the hood scoop yet.

A new updated Direct Injection Turbo (DIT) FA20 2.0-liter boxer engine is an option and would get fans excited again. Subaru Tecnica International could easily upgrade the internals, bump up the horsepower (315+) and torque (300 lb. ft) and even improve fuel mileage over the outgoing EJ25 boxer. We know it’s coming with a more rigid frame, so more hp and torque won’t be a problem. Subaru is also working on bringing out a plug-in-hybrid model in the future, and a new smaller DIT boxer could be fitted to the electric motor.

The all-new fifth-generation Subaru WRX STI needs a new exterior design language similar to the VIZIV Performance Concept car introduced at the Tokyo Motor Show. Subaru is great at teasing concepts that are off the chain, and then delivering something very generic for the actual production car. Of course the final production model won’t look exactly like the concept, but it gives performance enthusiasts a good idea of what the designers at Subaru Corporation have in mind for the future direction of the new performance model. Subaru needs to get more aggressive with the new 2020 design.

We’ve covered bringing back the 5-Door hatch to the WRX STI since it was dropped in 2015, and some fans still want it. Subaru fans want the hatch body style for its greater utility and cargo-carrying ability. The new-generation STI could also use a hatch body style to compete with the new Honda Civic Type R, and Volkswagen Golf R hot hatches. It does have its place in the WRX STI lineup and would make many fans happy.

Why even mention a Subaru WRX STI without all-wheel-drive? Exactly. It’s a core value for Subaru and it should never go away for the WRX STI performance car. It’s in the DNA of the STI and it’s what makes the car a great performer in dirt, snow and extreme low-friction environments. Owners who live in cold weather climates use their performance car all year long at you won’t find it sitting in the garage until spring. Look for Subaru to make improvements to the WRX STI Symmetrical AWD hardware in the new car.

Subaru’s new Subaru Global Platform (SGP) will make a huge difference, and the 2020 Subaru WRX STI will get new underpinnings. It will ride on the new SGP like Crosstrek and Impreza when they received their new-model upgrades. The new WRX STI will get a more rigid architecture, have an even lower center of gravity, and it could be lighter with the use of carbon fiber parts in the bumpers, fenders, and roof, and the SGP will give it improved driving dynamics.

Of course this isn’t an exhaustive list of upgrades for the all-new fifth-generation 2020 Subaru WRX STI. It will also need upgrades in the interior, high-tech features and safety equipment.

We like to hear from our readers, so leave your comments below. What would you like to see in the new 2020 Subaru WRX STI? If you liked this article share it with friends and tweet it out to your followers!

Ed B wrote on January 4, 2018 - 12:48pm Permalink
You have to go big or go home in the performance segment. Hopefully Subaru will get that message and actually have the prototype look very similar to the production model or enthusiasts will look elsewhere. The 5-door would be a great option as well. I like the new Ascent, but someone said it best, "they could have made that three years ago". The exterior looks a little dated already, but I'm sure it will sell like hotcakes. Subaru seems to have the "Midas Touch" right now...
JP wrote on January 5, 2018 - 1:55pm Permalink
Definitely need to update the tech inside the cabin... at least in line with the current legacy... also little things that they addressed with the '18.. I'm a '15 owner. No reason there has to be two buttons for the moonroof (Not a deal breaker, but still). And PLEASE smooth out the gear shifting. I know the car is 300+ HP, but still. They need to buy a Mazda 6 or RX8 and do what they're doing with their transmissions. If they could eliminate the 2nd gear rev hang and keep the design closer to the concept unlike previous generations that'd be great! As for hatchbacks, eh.... if you want a subaru hatchback buy an impreza or crosstrek!