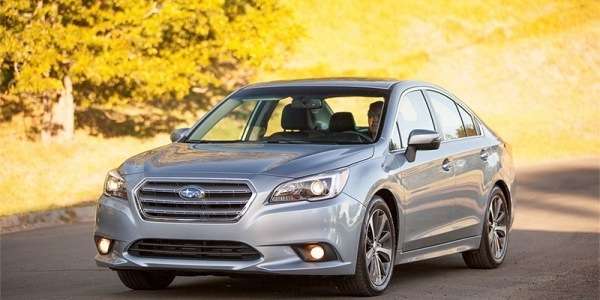 The all-new 2015 Subaru Legacy is already setting records. What about Legacy gives drivers the ultimate feeling of confidence?
Advertisement

The new-generation 2015 Subaru Legacy sedan gives buyers confidence because of features that other popular models don’t have. Legacy is already setting records and its increased availability helped the new sedan set a new monthly sales record of 6,198 units. This is a 117.7 percent increase month to date over the same period last year. Buyers are being drawn to the new Subaru sedan for a number of reasons and confidence is a big one.

After the winter we had last year, drivers are looking for a sedan that gives them confidence. We saw images of car sliding all over the icy roads in the South last winter and many buyers are looking to Subaru because of that experience. That’s why buyers are turning to the Subaru brand and the new Legacy. It starts with Subaru’s all-wheel-drive system.

None of the other top sedans in this segment like Honda Accord LX, Ford Fusion SE, VW Passat SE, Hyundai Sonata SE or Mazda6 Touring offers all-wheel drive. But the 2015 Legacy 2.5i Premium base model does. This is where Subaru and the new 2015 Legacy sedan excels. It’s always had the Subaru all-wheel-drive system, but it gets refined for the new six-generation Legacy.

The longest lasting sedan in its class

All this adds up to giving drivers the confidence they need to venture out this winter when conditions get bad across the U.S. and Canada. The new 2015 Subaru Legacy sedan comes with all-wheel-drive, new safety systems and longevity. The 2015 Legacy really does inspire peace of mind every time you get behind the wheel. It’s a big reason why it just set a new sales record in September.