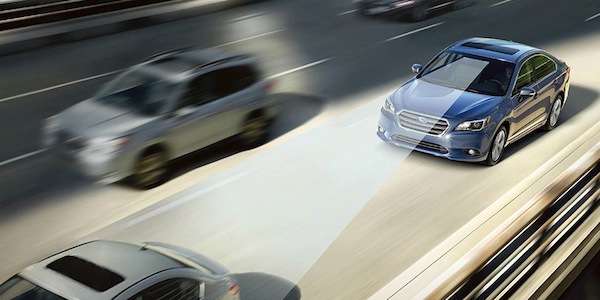 This 2015 Subaru Legacy safety feature could save your life

The all-new 2015 Subaru Legacy sedan arrives with more safety systems than ever.
Advertisement

The 2015 Subaru Legacy equipped with EyeSight could be the safest sedan on the planet. Fuji Heavy Industries (FHI), the maker of Subaru automobiles, has a goal of eliminating the possibility of any and all automobile accidents. If any automaker can do it, it will be Subaru. Their new-generation EyeSight safety system is a the reason why.

How does the system work on the new 2015 Legacy? The Subaru EyeSight driver-assist system in the all-new 2015 Subaru Legacy puts the driver at ease with more convenience and greater protection. The new-generation EyeSight system is effective in preventing vehicle mishaps and especially driver distracted errors.

To achieve this, Subaru continues to enhance its driving assist technology "EyeSight" which is based on recognition abilities using a stereo camera system. The system processes the images gained from its stereo camera and recognizes the object before an accident occurs. The new rear radar system now comes standard on the 2015 Legacy 2.5i Limited and 3.6R Limited and available for the 2.5i Premium.

The 2015 Legacy gets this “full-perimeter preventive safety” system. The rear radar system offers three functions. Blind Spot Detection detects vehicles behind the C-pillars and in other blind spots; Lane Change Assist detects approaching vehicles when changing lanes, and Rear Cross Traffic Alert detects close vehicles while reversing, such as out of a parking space or driveway. LED indicators on the side mirrors alert the driver. Rear Cross Traffic Alert uses an indicator in the rear view camera display. Also for the 2015 Legacy, new Steering-Responsive Foglights are added, which help illuminate curves for better visibility.

The 2015 Subaru Legacy also introduces a new type of airbag restraint and a new available rear radar system. The new front seat-cushion airbags help to keep occupants in place in a frontal collision. The new sedan comes standard with a rear-view camera, now located closer to the center of the car for more natural imaging. A new rollover sensor can deploy the side curtain airbags if an imminent rollover is detected. For added nighttime security, the 2015 Legacy features new standard welcome lighting that automatically turns on cabin illumination and exterior lights as the driver approaches or departs the car. The Limited trim offers a Keyless Access & Start system, as well.

Building safe vehicles is not new for Subaru

FHI’s recent development of the next-generation "EyeSight" shows just how committed the Subaru brand is to safety. And they are doing it across their whole lineup of cars. Building safe vehicles is not new for the Japanese automaker. They began their own independent crash tests in the 1960s before there was any official testing being conducted.

Subaru has enhanced the already excellent EyeSight system which will begin arriving in all new Subaru models starting next year. The new 2015 Subaru Legacy sedan uses the advanced system which is better than any other safety system in existence today.

Aaron Turpen wrote on February 22, 2014 - 11:32pm Permalink
The current-generation EyeSight is very good. I tried it in the 2014 Subaru Forester last year during a week long press loan. It works far better than many of the radar-based options some of the competition has.