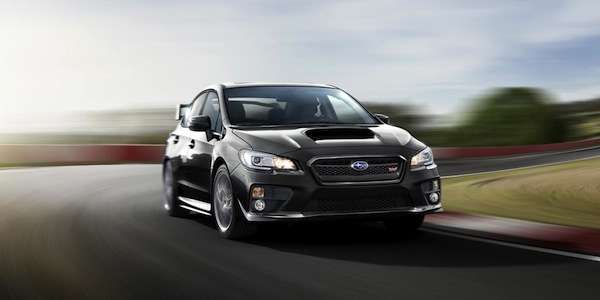 The 2016 Subaru WRX STI is announced in Canada. It comes with new infotainment and more safety features. How much will this cost?
Advertisement

The 2016 Subaru WRX STI has just been unleashed in Canada and is available for sale now for performance enthusiasts. The performance sedan is still offered in three trim levels, but they come with more refinement and new safety features for 2016. The Canadian entry level WRX STI price stays the same, WRX STI Sport Package gets a $300 price bump and the WRX STI Sport-tech Package increases $400. What upgrades does the three 2016 WRX STI trim levels get?

How does the rear radar system work? Blind Spot Detection detects vehicles behind the C-pillars and in other blind spots while Lane Change Assist detects fast-approaching vehicles when changing lanes. Rear Cross Traffic Alert detects close vehicles while reversing, such as out of a parking space or driveway. LED indicators on the side mirrors paired with an audible warning alert the driver of vehicles traveling in their blind spots and when changing lanes.

The new generation Subaru WRX/STI is a IIHS Top Safety Pick for the first time. Last year, WRX/STI had been rated a top pick, and then in May, IIHS gave the 2015 WRX/STI the award for good performance in each of the Institute’s crashworthiness evaluations, including the small overlap front test. This is the first time IIHS has rated the WRX and WRX STI, and both...read more.