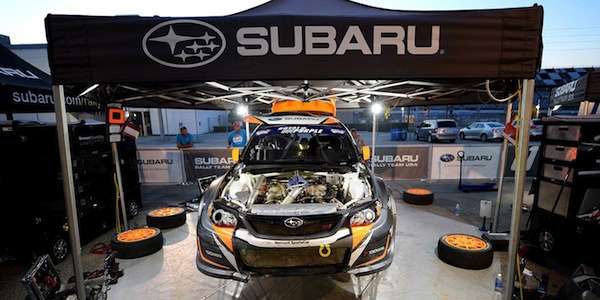 The three Subaru WRX STIs looked good on Friday, but had a tough day on Saturday. Where did they finish up?
Advertisement

With three cars in the Red Bull Global Rallycross race this weekend, Subaru SRT USA brought a bunch of equipment and extra parts for the Subaru WRX STI GRC cars to LA for the race. SRT USA added Travis Pastrana to the LA event which is the only double header event of the season. Pastrana adds a third car to the team of Isachsen and Lasek and the team brings a truck-load of spare pieces to the event.

With the extra WRX STI in the race this weekend, SRT USA brought 25 doors, 18 front and rear bumpers, 6 transmissions, 6 engines and 20 axles. And after Saturday’s action it looks like they might need most of the extra parts. Pastrana looked good in the #199 Subaru WRX STI and won a heat in Friday’s race. This weekend will comprise the seventh and eighth rounds of the series 2014 championship.

Saturday was shaping up good for the Subaru WRX STI team and Heat A saw Travis Pastrana and Sverre Isachsen on the front row with Scott Speed. Isachsen got a great jump at the start to take an early lead. Pastrana was in third place and couldn’t catch the two leaders. Speed took the Joker and leaped in front of Isachsen to finish first in the race.

Heat B saw Bucky Lasek on the second row with three Fords in the front row. Ken Block jumped out in front after taking the Joker and overtook Joni Wiman for the win. Lasek couldn’t make up the distance and finished in 5th place. He advanced to the Last Chance Qualifier (LCQ) for the next round.

Lasek started the LCQ on the second row and was able to get a good start, but he gets hit by Nelson Piquet Jr. and spins out in the first corner. The red flag comes out as Lasek’s car is sideways in the middle of the track. The race is restarted and Lasek falls back in the pack and is eliminated with a 5th place finish. Only the top 4 spots advance to the Final.
The Final

The Final was shaping up to be a good race with Speed, Block and Millen on the front row, and Isachsen, Pastrana and Wiman on the second row. Anything can happen in the Final and Isachsen had mechanical problems right out of the gate. Isachsen was out of the race. Pastrana was in 8th place for much of the race and was able to overtake two more cars to finish 6th overall. Scott Speed wins the race, Joni Wiman takes second and and Ken Block gets a third place finish but moved into first place in the point standings.

The three Subaru WRX STIs looked good on Friday for the qualifying, but had a tough day on Saturday and couldn’t pull off a podium finish. Red Bull Global Rallycross resumes this afternoon at 5pm ET on NBC. It looks like Subaru will need some of those extra parts they brought to LA.