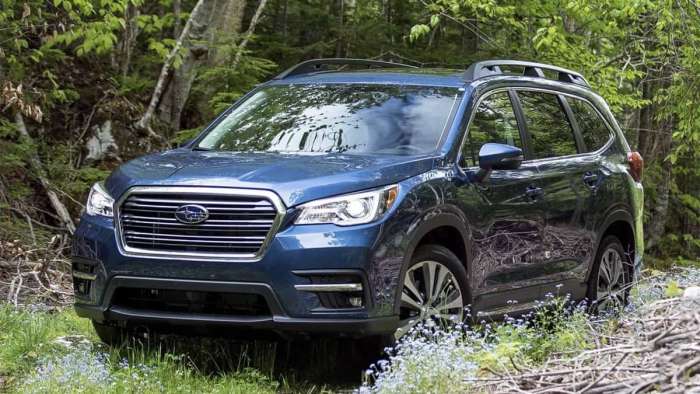 Subaru made the largest vehicle ever to reach three goals: one of them intending to make the 2019 Subaru Ascent the best 3-row SUV. Did they succeed?
Advertisement

Families looking for safety, value, and comfort can find them in the largest vehicle Subaru Corp has ever built. It’s built in America for U.S. and Canadian families and it’s not sold anywhere else around the globe. The Ascent family hauler just picked up another award, this one coming from AutoTrader who named it one of the Best New Cars for 2019. Ascent shakes things up in the 3-Row segment.

What’s in it for you

The 3-Row Ascent tops out in safety and earned the highest possible ratings from the Insurance Institute for Highway Safety (IIHS) in all crashworthiness and front crash prevention categories. It should be no surprise Ascent gets the highest safety rating because Subaru touts safety as being one of their core values. The Japanese automaker has six other TSP+ award-winners, and can now boast they have seven with Ascent.

Weakness turns into a strength

What used to be a weakness for Subaru, the new 2019 Ascent family hauler turns into a strength. The 2019 Subaru Ascent Touring trim makes it as a top-ten best interiors nominee by Wards Auto. Subaru interiors were the weak point for all their cars but not anymore The brand has come a long way since they had more hard plastic inside than anything else. Subaru interior materials were cheap and the fit and finish were poor. Those days have changed with the introduction of the Ascent Touring.

The Ascent is the biggest and now the most luxurious vehicle the brand has ever built. They needed to get it right after the failure with the Tribeca 3-Row. “We are extremely proud of the all-new Ascent,” said Tom Doll, President, and CEO, Subaru of America, says “Our goal was to create a family vehicle made to Subaru’s highest standards of safety, comfort, and value.” AutoTrader just named the 2019 Subaru Ascent as one of the Best New Cars for 2019. It looks like the Japanese automaker reached their goal.

Leave your comments below, share the article with friends and tweet it out to your followers! Let us know if you think the 2019 Subaru Ascent is the best 3-row SUV.

John Washbush wrote on April 13, 2019 - 3:06pm Permalink
I had the opportunity to be taken for a ride just yesterday in a brand new (200+miles), beautiful blue Subaru Ascent. (I have the smartest and most generous neighbors ...:>) It is a magnificent accomplishment. It is a magnificent vehicle. The owner's manual package weighs almost 5 pounds! The ride is very pleasant. It has bells and whistles as well as USB ports and "bottle holders". I heard 19 cupholders hidden somewhere. Quick, smooth, warning devices, incredible back up camera view ... can't say enough. Now I want one.