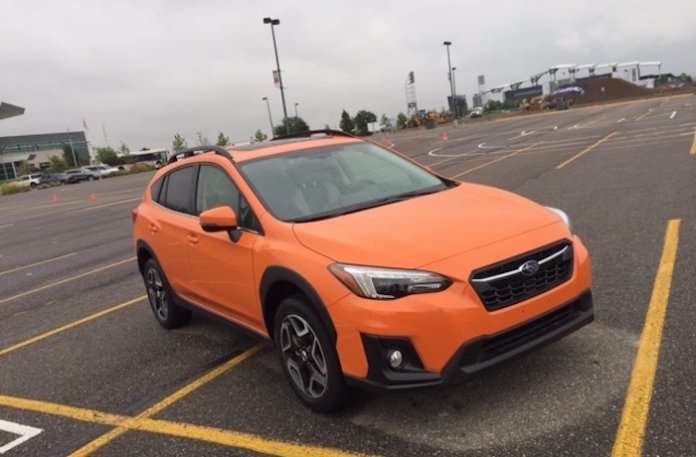 2018 Subaru Crosstrek Gets Its Pumpkin On Again

The new 2018 Subaru Crosstrek gets its pumpkin on again. Would you buy an orange car?
Advertisement

Subaru likes to bring out orange vehicles, like the unique “Orange and Black” Special Edition WRX and WRX STI launched in 2013. But their core models like the Crosstrek is the only other model to get the bright orange pumpkin color. The 2015 Subaru Crosstrek was the last model to the Tangerine Orange Pearl exterior color. Even though it sold more than Crystal Black Silica Crosstreks, it was dropped in 2016.

Well, it’s back for the new-generation 2018 Subaru Crosstrek. At the all-new Crosstrek media launch in Denver, Todd Hill, Subaru’s Car Line Planning Manager, says, "We took away the orange a couple years in and we got a lot of people that told us that they really wanted us to bring it back.”

Subaru received so many requests from customers to bring the orange back, and Subaru listened. They changed up the variation a bit, and orange is back for the second-generation Crosstrek in the form of "Sunshine Orange," a brighter shade than the Tangerine Orange Pearl previously offered on Crosstrek.

Subaru is also introducing another new color on the second-generation crossover, "Cool Gray Khaki," a shade that can also look a light shade of blue depending on the light. "Hopefully we'll have some more fun colors in the future," added Hill. Look for the all-new-generation 2018 Subaru Crosstrek to get its pumpkin on again with a new shade, Sunshine Orange.

Here’s the Subaru Crosstrek colors for 2018

Reader poll: Would you buy an orange vehicle?

Karen F wrote on July 1, 2018 - 8:21am Permalink
I LOVE the Sunshine Orange, and in my opinion, makes the black moldings and trim really pop. Not only would I drive one - I just bought one! Love it!
John Banket wrote on August 15, 2021 - 5:44pm Permalink
Yes I would buy an orange car. Have a 2013 Subaru XV Crosstrek in orange and I love it. Stupid subaru didn't learn their lesson in2016 when they dropped it. The dopes did it again in 2021. BRING BACK ORANGE SUBARU!
Kimberly Lynne Hill wrote on July 1, 2022 - 9:26am Permalink
I love my sunshine orange crosstrek. I have learned that the orange is discontinued again which makes no sense to me. I'll get another crosstrek when this one dies but the color must be orange so hopefully the color will be brought back.