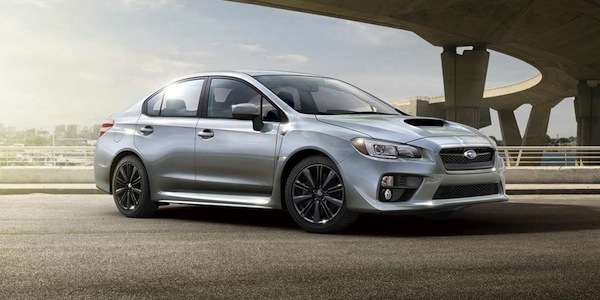 With the addition of the 2015 WRX and 2015 WRX STI, Subaru now has six models that have earned 2014 safety awards from IIHS.
Advertisement

The 2015 Subaru WRX and WRX STI has helped Subaru achieve an ultra exclusive distinction that no other car brand in the world has. With the addition of the 2015 WRX and 2015 WRX STI, Subaru achieves more 2014 IIHS Top Safety Picks than any other brand. Subaru now has six models that have earned 2014 safety awards from the IIHS. All Subaru's are build the same way.

Not the performance line of 2015 WRX and WRX STI earn the Top Safety Pick award for good performance in each of the Institute's crashworthiness evaluations, including the small overlap front test. IIHS introduced the small overlap evaluation in 2012, which is more challenging than either the head-on crashes conducted by the government or the IIHS moderate overlap test.

What makes the test so tough for automakers to pass? 25 percent of a vehicle's front end on the driver's side strikes a rigid barrier at 40 mph. The crash replicates what happens when the front corner of a vehicle collides with another vehicle or an object such as a tree or utility pole. It destroys the car and can be devastating to passengers involved in a crash like this.

The new generation 2015 WRX also earned good ratings in the moderate overlap front, side, roof strength and head restraint tests. To qualify for Top Safety Pick, a vehicle must earn a good or acceptable rating for small overlap protection and a good rating in the other four tests. The "plus" is awarded to vehicles that meet those criteria and also earn a rating of basic or higher for front crash prevention.

Subaru is committed to building all of their vehicles to be safe, and not just their SUVs. Shiro Ohta, president and CEO of Subaru Canada, Inc. said, "Subaru has forged a reputation for developing some of the most technologically sound safety systems in the world. As the highest performing cars in our fleet, our completely redesigned 2015 Subaru WRX and WRX STI offer an ideal balance between sheer excitement and absolute security."

How does Subaru do it in their whole fleet? Subaru's ring-shaped reinforcement frame has been used for more than a decade and has proven very effective. Now, all Subaru models have been enhanced even more to provide better protection in the structure increasing cabin rigidity and absorbing impact energy from any direction. This is the design that gives the superior protection that enables all their vehicles to keep achieving these safety awards year after year.

The 2015 Subaru WRX and WRX STI are rally-bred performance vehicles that will be driven fast on the track. It’s comforting to know that they will be safe on the street or track. Now Subaru’s performance lineup has helped the Japanese automaker achieve an ultra exclusive distinction that no other car brand in the world has.