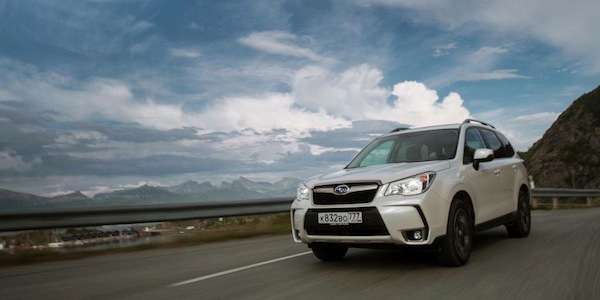 2015 Subaru Forester wins Car of the Year again in Russia

The 2015 Subaru Forester wins “Light Off Road” Car of the Year in Russia for the second year in a row. What sets Forester apart?
Advertisement

People around the globe aren’t really that much different and Russians like the 2015 Forster SUV for the same reasons Americans do. The new generation Forester has been chosen the “Light Off Road” Car of the Year in Russia for the second year in a row by the newspaper "horn." People with active lifestyles in Russia chose Forester again because of its off road abilities.

There are four reasons active buyers in Russia like the Forester SUV better than any other vehicle in the segment. Forester is functional and practical, and provides comfort on long journeys regardless of driving style. The SUV also has the necessary equipment that is suitable for active lifestyles. These are Forester’s attributes that have made it Subaru’s best seller not only in Russia, but also around the globe.

The 2015 Forester was chosen by popular vote and there were different categories for the "Car of the Year in Russia 2015" national award. This year it was attended by over a million people. The vehicle chosen in each category must receive unanimous recognition by experts and motorists to win. Forester beat all others in the "Light Off Road” category.

Subaru’s vast experience building these multi-purpose all-wheel-drive vehicles gives them a distinct advantage over the competition. They’ve been doing it for decades and this is their niche market, so it’s not a surprise the new-generation Forester keeps...read more.

Ichimura Iosiaki, CEO of Subaru Motor Company, said: "We are honored to receive this award. Subaru - small brand, so to be the best, perhaps, in the most popular class of cars in Russia - a great honor and responsibility. We thank our subaristov and everyone who voted for the Forester.

A formula that works for Subaru

Why is the new generation Subaru Forester gaining so much traction around the globe? Subaru engineers chose the right direction in the development of the new-generation Forester and took into account all the needs of customers. It’s a simple formula that Subaru has followed and has helped them create a niche market for their vehicles. Forester is about utility, it’s fun to drive and comes with Subaru’s all-wheel-drive.

People with active lifestyles in Russia and around the globe use their Forester for grocery hauling and commuting, but they will also use the small SUV for recreation on the weekends. Subaru’s Symmetrical all-wheel-drive capabilities make it the perfect go-anywhere multi-use vehicle. In Russia, they think the 2015 Subaru Forester is the best “Light Off Road” vehicle on the planet.