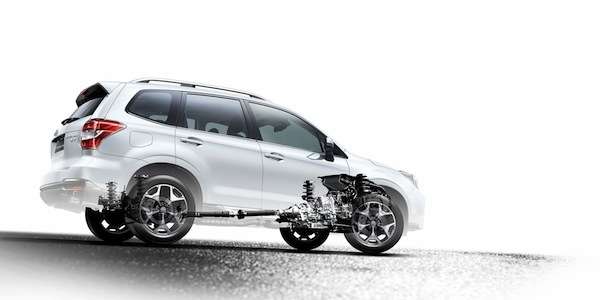 2015 Subaru Forester is designed for off-road adventures. The new Russian variant gets more comfort on the inside for enthusiasts.
Advertisement

The global Subaru Forester, designed for off-road adventures, is making its way to the Russian market and gets a few new upgrades for 2015. Subaru only sells three models in Russia, the all-wheel-drive Forester SUV, WRX/STI performance sedans and the XV crossover. Subaru Motor LLC, the official distributor of Subaru vehicles in Russia and Belarus, says the new Forester will begin arriving this spring.

The Forester received a complete redesign for the 2014 model year and remains relatively unchanged on the outside. Inside is where the multi-purpose all-wheel drive SUV gets most of its upgrades.

Like other global markets, Russians will take the Forester and use it for off-road recreation and many enthusiasts will modify the vehicle for more extreme use. For 2015 it still comes with Subaru’s Symmetrical all-wheel-drive that makes the vehicle so popular in the northern Russian climate. It also comes with the new X-Mode for steep off-road inclines. AWD enthusiasts now get more comfort on the inside for 2015.

For 2015, Forester comes equipped with new features on the inside that will make life more comfortable for the driver and passengers. Forester gets a new multimedia system with a color LCD display and touch controls and can be used with smartphones. Other features inside include a new steering wheel with controls, newly designed climate control, silver rim ducts and new design of the ignition key.

CHECK OUT: Is mystery Subaru hatch the refreshed 2016 XV Crosstrek?

The 2015 Forester also gets an auto switching rear wiper that includes a windshield wiper and reverse gear, triple turn signal light with a short press of the lever, new auto on/off headlamps and a new "welcome and support function" that allows the driver to light the way when approaching the car or away from it. The only exterior change will be a new shark fin antenna on the roof.

In the Russian market, Forester will still be available with two engine and transmission options. The small SUV will be available with either the 2.0-liter or 2.5-liter powerplants. The 2.0-liter boxer engine comes mated to either the 6-speed manual gearbox or the new Subaru continuously variable transmission (CVT) automatic. The 2.5-liter only comes with the CVT. Subaru Russia also sells the turbocharged 2.0XT performance model.

The 2015 Subaru Forester will be arriving soon in Russia for off-road enthusiasts. The updated 2015 Forester goes on sale in Russia May 2015. Subaru Motor LLC did not release pricing information on the new SUV and will be announced closer to the dealer launch date this spring.

LG's New EV Battery Plant Is a Welcome News for Tesla
Tesla Giga Berlin's New Hurdle: It's Not Only the Gov't, but Now Tesla Itself
END_OF_DOCUMENT_TOKEN_TO_BE_REPLACED