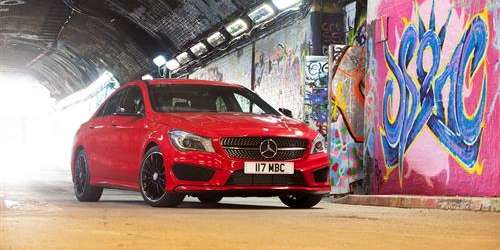 The all-new 2014 Mercedes-Benz CLA-Class is already getting awards, but from an unlikely place.
Advertisement

The 2014 Mercedes-Benz CLA-Class is wildly popular with new buyers and it’s getting some unlikely recognition around the globe. The new four-door coupe was runner-up in the Business Car of the Year category from BusinessCar.com. The UK magazine and website is a source for fleet information. The magazine gives their annual Business Car of the Year award and they thought enough of the new CLA-Class that it was runner up to the VW Golf.

In addition, the new S-Class has collected its third honor of 2014, and received Luxury Car of the Year in the BusinessCar Awards, voted for by the readers of BusinessCar. And Mercedes-Benz, while it didn’t win, was highly commended in the Manufacturer of the Year category.

BusinessCar Editor Paul Barker said, “Mercedes-Benz has made a splash at the 2014 BusinessCar Awards that’s in-line with its growing fleet presence and influence, and it’s clearly a brand on the up. The stylish new CLA coming second in our headline Business Car of the Year category shows how far Mercedes has come, and the Highly Commended spot in our Manufacturer of the Year category illustrates that the company is now right in fleet consciousness, while the peerless S-Class’s Luxury Car of the Year victory endorses Mercedes’ quality and prestige.”

The new 2014 CLA is new on the scene and is appealing to a new generation of buyers in a big way. Steve Cannon, who is head of Mercedes-Benz USA told Bloomberg at the Detroit auto show, that 8 out of ten buyers, who are buying the CLA are new to the brand and have never purchased a Mercedes product before. That is an astounding number for the German automaker.

Mercedes is drawing new buyers away from purchasing “mass-market” cars like the Ford Taurus ($26,780) and the Chrysler 300 ($30,545). The new CLA starts at $29,900 before destination. Mercedes’s strong start with its lowest-priced vehicle in the U.S. helped the Daimler unit grab the lead in American luxury car deliveries in 2013, beating out BMW, Audi and Toyota’s luxury division Lexus for the first time in more than a decade.

But could the cheaper compact CLA hurt Mercedes image as a top luxury brand? Steve Cannon doesn’t think so. So far, 80 percent of CLA buyers are new to the brand, and the lower prices are drawing people into the showrooms where they notice models like its top-selling C-Class, which starts at $35,800. Cannon told Bloomberg, “Before the rollout, I might have been worried about CLA cannibalizing C-Class, but quite to the contrary, it fueled C-Class sales. Just because we’re moving to a new price point doesn’t mean we’re diluting. It just means we’re opening up the brand.”

Mercedes-Benz has clearly positioned themselves well in the new entry-level luxury category. It’s one of the fastest-growing segments in the automotive world. The CLA is clearly getting the attention of luxury shoppers looking for an affordable option and the initial response has been stellar for the luxury brand. The 2014 Mercedes-Benz CLA-Class is popular with a new generation of buyers because of its pricing strategy, four-door coupe styling and high-tech features.