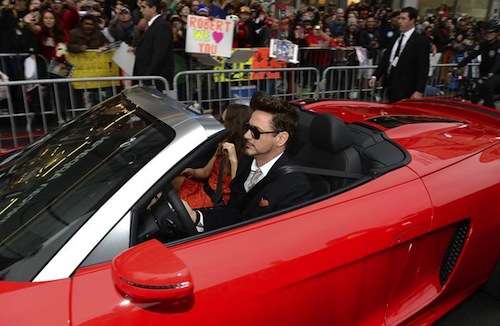 Last night fans lined up to see the star-studded U.S. premiere of one of summer’s most anticipated films, Iron Man 3. Audi is as much a star of the show as all the stars in the new film. Robert Downey, Jr., driving up in Tony Stark's vehicle of choice, a red 2014 Audi R8 Spyder, brought Hollywood Boulevard to a halt as he arrived at the red carpet. The fans went crazy as the flashy, red Audi R8 Spyder and Downey, Jr. with his wife Susan made the grand entrance. Audi did a good job of showcasing many of their cars at the premiere. What other stars arrived driving new Audi’s?

The premiere of Iron Man 3 was held at the historic El Capitan and TCL Chinese Theatres in Hollywood, CA and Audi brought a full stable of their cars driven by the movies stars. In addition to Tony Stark's vehicle of choice, a red 2014 Audi R8 Spyder, Gwyneth Paltrow arrived in an Audi A8L TDI. The event was full of celebrities who arrived driving the German automakers clean diesel vehicles including the A8L TDI and Q7 TDI. It almost looked like a clean diesel TDI event as much as it was the premiere of the Iron Man 3 movie.

Audi makes it to the red carpet

The Iron Man 3 premiere was presented by Audi and they made sure their vehicles were prominently driven and displayed with the stars. Mario Lopez admired the stunning Audi S7 on display on the Iron Man 3 red carpet and he was even overheard saying how much he adores his own Audi. But the Audi star of the show was the new red 2014 Audi R8 Spyder that Robert Downey, Jr drove up to the red carpet.

The new 2014 Audi R8 will come in coupe and Spyder variants and will be more dynamic and will come with even more power than ever before.The top of the range Audi R8 V10 Plus will come with enough power to satisfy any super hero. The V10 powerplant will pump out 550 horsepower with 398 lb ft of torque. Equipped with the available S tronic, it sprints from 0-60 mph in 3.3 seconds and can achieve a top speed of 196 mph.

Many Audi vehicles in Iron Man 3

The new R8 won’t be the only Audi to be featured in the new Iron Man 3 film. Robert Downey Jr.’s character, Tony Stark, can be seen behind the wheel of the Audi’s all-electric R8 e-tron sports car prototype, and Oscar winner Gwyneth Paltrow, who revives her role of Pepper Potts, CEO of Stark Industries and girlfriend of Tony Stark, can be seen driving the new Audi S7 Sportback.

And there will be additional vehicles featured in the film that will include the Audi A8L and A6. Audi has played a prominent role in the first two Iron Man movies with main character Tony Stark’s vehicle of choice being the Audi R8 Coupe in Iron Man 1 and the R8 Spyder in Iron Man 2.

Robert Downey, Jr. rolled up at the premiere of the Iron Man 3 in a red 2014 Audi R8 Spyder. Tony Stark, played by actor Robert Downey Jr., will be behind the wheel of an another Audi, the all-electric R8 e-tron sports car prototype R8 as Iron Man 3 debuts in movie theaters across the country on May 3rd, 2013.

LG's New EV Battery Plant Is a Welcome News for Tesla
Tesla Giga Berlin's New Hurdle: It's Not Only the Gov't, but Now Tesla Itself
END_OF_DOCUMENT_TOKEN_TO_BE_REPLACED