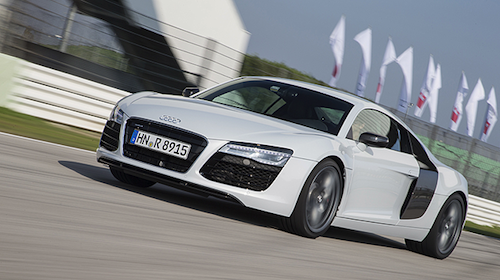 The new 2014 Audi R8 is more powerful than ever with Tony Stark back in the supercar for Iron Man 3.
Advertisement

Audi has officially announced that the 2014 R8 will be more dynamic and will come with even more power than ever before. The new 2014 Audi R8 is officially on sale and Audi’s most powerful supercar will be driven by Tony Stark in the Iron Man 3 which makes its premiere in theaters on May 3. Audi has also released pricing on the full model lineup on the new R8. They also gave us a new Iron Man 3 video below to show off that the new 2014 R8 is Iron Man approved. Just how much power will Tony Stark have when he gets behind the wheel of the 2014 R8?

Audi R8 V10 Plus gets top power and features

The top of the range Audi R8 V10 Plus will come with enough power to satisfy any super hero. The V10 powerplant will pump out 550 horsepower with 398 lb ft of torque. Equipped with the available S tronic, it sprints from 0-60 mph in 3.3 seconds and can achieve a top speed of 196 mph. Audi says the new R8 V10 Plus weighs approximately 130 lbs. less than the R8 V10 because of a few key performance features. They include ceramic brakes, carbon fiber side blades, front splitter, rear diffuser, and spoiler; a smaller fuel tank; manual Alcantara seats and reduced sound insulation in the engine bay.

A number of improvements for 2014 models

The new R8 gets a number of other improvements including the new seven-speed S tronic transmission that improves the 0-60 mph time by 0.3 seconds on the R8 V10 Plus. It also comes with Audi’s new full-LED headlamp design that “continues to give the R8 an unmistakable presence while standing still and at speed on the road or the track.” The R8 is Audi’s halo sports car and gives the brand the performance vehicle that represents what they are about.

Scott Keogh, President Audi of America said, “The launch of the R8 represented the turning point of the Audi brand and placed luxury on notice. The 2014 R8 will continue to build upon that success for our halo sports car and for the Audi brand as a whole.” The luxury can be seen on the inside with beautiful diamond-stitch leather seats as well as an available flat-bottom multi-function steering wheel among other improvements.

The new 2014 Audi R8 is the brands ultimate performance supercar and it features more power with the top up or down. Tony Stark, played by actor Robert Downey Jr., will once again be back behind the wheel of the Audi R8 as Iron Man 3 debuts in movie theaters across the country on May 3rd, 2013.