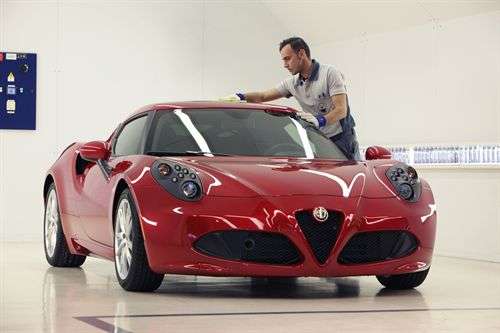 Alfa Romeo reveals the tech secrets of the new 2014 4C which represents the sport DNA of the compact supercar. What did Alfa Romeo do to ensure the supercar would be sporty and fast?
Advertisement

The all-new 2014 Alfa Romeo 4C has been highly-anticipated here in the U.S. and around the globe. The synergies between Alfa Romeo, Maserati and Chrysler have helped produce the high-performance 4C sports car that will be sure to excite performance fans. Now for the first time, Alfa Romeo has revealed three key technology secrets that show us how they produced the new two-seat sports car. What did they do to ensure the 2014 4C would be of the highest quality and no detail would be overlooked?

One of the lightest supercars on the planet

The new 2014 Alfa Romeo 4C started as a brand new idea for the Italian automaker on a “blank sheet of paper” in the design room. They wanted to build an “affordable supercar” that would be both exclusive and performance oriented in content. The first challenge was to make the new sorts car light with a weight/power ratio lower than 4 kg/cv. This was quite a challenge but engineers decided to reduce the cars weight by choosing materials that were super light-weight. They were able to achieve this with a dry weight of just 895 kg which is a record and makes the new 4C one of the lightest cars in the world.

The secret for Alfa Romeo and Maserati to accomplish the goal was by using 10 percent carbon fiber and the entire volume of the 4C represents as much as 25 percent of the light material. This helps achieve both weight-savings and excellent performance. Alfa Romeo is the only automaker who can produce over 1000 units a year using this unique “pre-peg derived from Formula 1 manufacturing process. They also used aluminum for the reinforcement cage, roof trusses front and rear, front brake discs, and bell and cast crown. These aluminum components translate to a weight savings of 2 kg.

For the body, the Italian automaker chose SMC (Sheet Moulding Compound), a composite low-density and high strength material that obtains a weight reduction of 20% compared to the traditional steel sheet. It also helps in the design and reduction in production parts which helps with assembly times and cost. The new supercar also uses a light-weight material called PUR-RIM (polyurethane injected) for bumpers and fenders. The windshield in the 4C also gets special 4 mm thick glass that helps reduce weight by 15 percent.

DNA comes from years of history in Modena

The new two-seat sports car is manufactured at the plant in Viale Ciro Menotti in Modena Italy. This is no secret, but the DNA of the new 4C comes from years of sports car design philosophy and the Fiat group wanted this same history to be a part of their new supercar. The production time of the new two-seat sports car takes much longer and the craftsmanship and passion that goes into the car is creates a quality unseen in mass production cars. An interesting fact is that the average age of the assembly workers is 29 years old and 60 percent have a diploma or degree with an average experience level of over 5 years.

After going through the testing area, Alfa Romeo says all 4C sports cars face a road test of 40 km in the hands of an experienced tester. This is a typical practice of the most prestigious supercars, but the team of testers is one of the flagships of the establishment. They are all experienced drivers, driving enthusiasts and racing professionals. “This leads almost to the end of the production flow of 4C when the cars reach the finish area where they are subject to the final steps of development before proceeding to the logistics business to go on the market.”

Synthesis between past and future of Alfa Romeo

The new Alfa Romeo 4C is inspired by the centuries-old tradition of the brand in the future “by projecting the true values of the brand.” Those include Italian style, performance and technical excellence aimed at maximum driving pleasure in total safety. The 4C was designed by engineers at Alfa Romeo and Maserati in Modena and uses technology and materials derived from the 8C Competizione - carbon, aluminum, rear-wheel drive - and technology from other Alfa Romeo models currently in the lineup. This helps maximize the sportiness of the 4C.

Designed by Centro Stile Alfa Romeo, the 4C immediately recalls some iconic models of the tradition that have left an important mark on the history of the brand and relive all together in the new compact supercar: the "most of the Alpha Alpha". The same combination of Alfa Romeo 'Lightness & Efficiency' has given birth to some of the past unforgettable cars like the Alfa Romeo 8C 2900 B Touring from 1938. And the all-aluminum body of the 1900 C52 "Disco Volante" of 1952, a car that had a top speed of 230 km/h and weighed only 760 kg.

In Europe, the first deliveries of the Alfa Romeo 4C are expected in the second half of September of 2013 while the U.S. version will be presented in Los Angeles in November of 2013. The first deliveries are expected by the end of the year around the globe. Prices in each market will be announced closer to launch. Annual availability of the Alfa Romeo 4C will be limited to only 3,500 copies, 1,000 of which are destined for Europe.