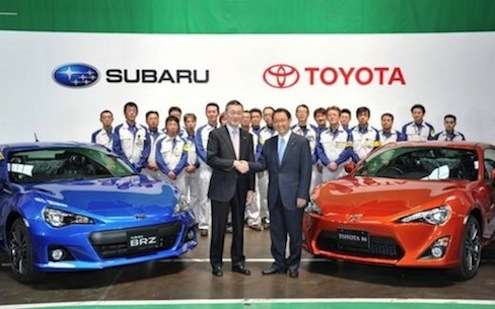 The 2013 Subaru BRZ and Scion FR-S continue to pile up awards and the popular sport coupes have been nominated for another joint award.
Advertisement

When Toyota and Subaru joined together to create an affordable two-door sports coupe, they didn’t have any idea that the rear-drive sports cars would be as successful as they have been. Akio Toyoda, the top man at Toyota, had a vision to change his company and bring a new sporty look to the entire lineup. Along with Subaru, they hit a home run with their joint effort. The Subaru BRZ / Scion FR-S / Toyota GT 86 have already received numerous awards and have just been nominated as a Best of 2013 car by Cars.com.

Both cars have been selling well around the globe and the sports cars have been wildly successful and are being rewarded by the world press. The 2013 Subaru BRZ and Toyota GT 86 (Scion FR-S in the U.S.) have also recently jointly been honored by receiving the 2012-2013 Car of the Year Special Award in Japan. The 2013 Scion FR-S and Subaru BRZ also shared the 2013 10Best award from Car and Driver.

Nominated for driving experience and affordability

Now the Subaru BRZ and Scion FR-S get more media love with the latest nomination from Cars.com who is an online review and consumer information website. Judges evaluated this year’s new and redesigned cars, and they praised the BRZ/FR-S for its driving experience and affordability. To earn the nomination for best overall car, the FR-S first won the Cars.com best sports car category.

Now the sports cars will go up against the best SUV, midsize sedan, luxury sedan and pickup as well as the best hybrid won by the Toyota Prius c. The overall Best of 2013 winner will be announced on Jan. 15, 2013 during the North American International Auto Show in Detroit.

“Consumers frequently turn to online research before a vehicle purchase, so we are honored that Cars.com selected the FR-S as one of the best cars of the year and recognized its uniqueness in the marketplace,” said Scion Vice President Doug Murtha “By delivering a fun and accessible sports car, Scion expands its appeal with drivers looking for vehicles they can make their own.”

Give the two Japanese automakers credit for working together on a joint effort to produce a two-door sports car that is fun and affordable. The 2013 Subaru BRZ and Scion FR-S are truly deserving of all the praise.

LG's New EV Battery Plant Is a Welcome News for Tesla
Tesla Giga Berlin's New Hurdle: It's Not Only the Gov't, but Now Tesla Itself
END_OF_DOCUMENT_TOKEN_TO_BE_REPLACED