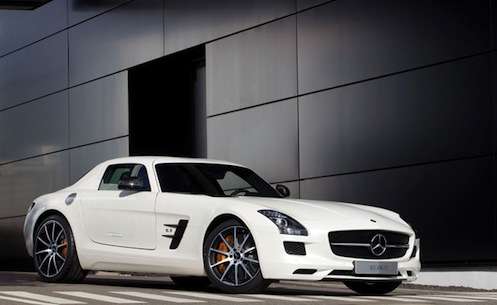 The 2013 Mercedes-Benz SLS AMG GT that was recently revealed has run the Nurburgring in under 7:30.
Advertisement

When the 2013 Mercedes-Benz SLS AMG GT was revealed earlier this month with performance enhancements and a new GT designation, the German automaker said the improvements would match the “GT” added to its name. With a recent lap time on the Nurburgring of just under 7:30, it looks like the additional 20 horsepower and suspension improvements have made a big difference. The updating to the supercar came from the knowledge Mercedes gained from campaigning its GT3 race car.

AMG chairman Ola Kallenius told Auto Blog that a lap of the Nürburgring Nordschleife in the previous generation SLS AMG coupe “comes in at right around 7:35, and that the new 2013 SLS AMG GT does the same in a tick under 7:30.” The five seconds quicker lap time demonstrates just how much improved the mid-cycle refreshed SLS AMG GT really is. And acceleration is now 3.6 seconds for the hardtop GT versus the current 3.7 seconds for the SLS AMG.

Under the hood, the new GT uses the same 6.3-liter performance V-8 from the current SLS, but the GT has an additional 20 horsepower available to tap into. Peak horsepower is now 583 from the previous 563 with torque remaining at 479 lb. ft. Mercedes was able to achieve the additional horsepower through an increase in compression and internal dethrottling measures.

The 6.3-liter V-8 is mated to a seven-speed AMG SPEEDSHIFT dual-clutch transmission located on the rear axle that has been recalibrated for more direct shifts when in "M" manual mode. Engineers were able to develop a new gear change logic and optimized transmission control, to shorten the shift time required during shifts. The additional horsepower, alloy paddle shifters and transmission changes aid the SLS AMG GT in running a faster Nurburgring lap time.

The suspension features two settings, “Sport” and “Sport plus” which is the most hardcore setting for use on the Nurburgring. The press release was right when it said the new SLS AMG GT will be able to deliver faster lap times on the race track than with the regular SLS AMG. All of this is achieved through a button on the AMG DRIVE UNIT that automatically reduces body roll.

The 2013 Mercedes-Benz SLS AMG GT will start hitting showrooms in the U.S. in November, and the MSRP is expected to rise around $5,000 for each model. The coupe will run around $195,000 while the Roadster variant will be close to $200,000. It looks like the new performance upgrades are worth the price bump.